which bikes do you regret selling/crashing/losing?

i’m not one who usually gets attached, but this one i miss: was my first fixxae and it glistened in the sun. those colours. that chromey lustre! so nice, especially with a shamal up front.

alas, i discovered the right fork blade had a hairline crack extending almost all the way round. at least i was lucky enough to discover this off the bike.

tried for a replacement fork, but without the full original paint scheme it wasn’t the same. ended up selling the frame to another foa member (just as i’d purchased it). not sure if its still doing the rounds.

i miss my serotta. that’s it on the far left. in some fine company.

I’ve had a lot of bikes but none I genuinely miss. Except the first …

My Hillbrick Pista, after six months sans fixie I just ordered a brand new one.

No photo but i miss my Gt tarck. It got t-boned by a Rav 4.
It looked like this but polished… 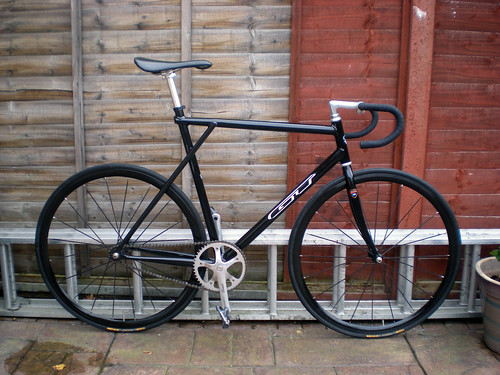 Every time I see a GT tarck I want one more and more.

I miss my Bumblebee BMX.

My Kerry Hopkins track in 2009. I took it to Europe and rode some epic km’s on it in Poland, Germany, Czech, Netherlands and Italy. If I could track it down now I would seriously consider buying it back. Last I knew it was in Victoria.

My first custom frame given to me by Colossi. Fucking car doors.

My Speedwell dragster when I was 8.
Singlespeed, coaster brake, low sissy bar.
Freedom on wheels. Surprised a few people on this thing. It was rubbish.

My sky blue Kuwahara Magician, stolen from school in year 7.

Only bike I’ve sold now belongs to my good friend ‘Good Egg Williams’ & she said I can visit anytime.

actually, I saw it this morning, locked up outside her work. huzzah!

Stumbled across this old pic of 17 year old me and an old bmx of mine I really miss.

Not a whole bike but am looking to build a legit track bike and am experiencing deep regret over selling my Cane Creeks to make bills at the time. They were really really awesome

my orange p7. got the frameset for $50 off fleabay. i’ve sold a lot of bikes but i miss that one most.
my Ti SS was cool too. my litespeed was great but i dented the top tube so my love for it dropped.

I can’t believe I sold this:

I can’t believe I sold this

Ha, Megs still has it n loves it. It went to a good home man.

Ha, Megs still has it n loves it. It went to a good home man.

Awesome, it seriously makes me happy to know that!

Everytime it’s sunny and I go for an easy cruise I wish I still had this.