I bought this frame last year while I was living in London. Only just arrived back home a week ago so finally got around to taking some decent photos. Have built it up as a fixed roadie with proper road drops and hoods and a pretty spinny gearing for Perth hills. It still needs a black Chris King headset and black crankset (undecided as to what, perhaps 75s or Omniums). Also has a nasty scratch on the downtube now from stupid luggage handlers, so looking to get it resprayed again at some point.

Enough babble, this is how it currently looks… 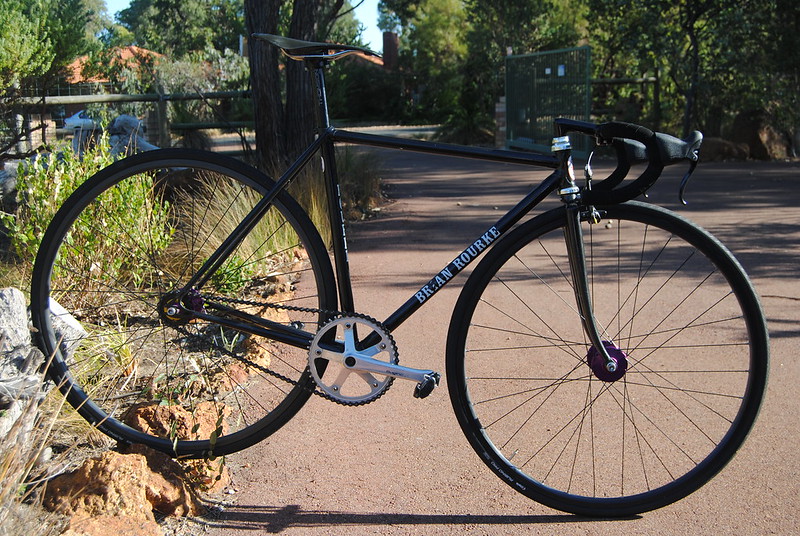 Yeah me too. I’d leave the silver headset, crank and even go a silver nitto stem hey. The silver creates good contrast for the black… something, something colour way

This look sweet. Sensible set up and still looks mean.

Yeah looks awesome! I think the cranks/headset are fine as is!

I once road 80gi up to John Forrest National Park, and then back down the Great Eastern Highway ha ha not the most sensible thing i’ve done, that gear looks way more appropriate!

Nice build. The black ck headset would finish it nicely. I like the silver cranks against the rest of the bike. Welcome to FOA too

Excellent! Love me a Rourke.

Remember to slam that stem…oh, wait, you already have.

So is that the original fork? Did you have to drill it or did it come with a brake hole?

I can’t get with dummy brake levers, but apart from that, nice work.

Nice build. The black ck headset would finish it nicely. I like the silver cranks against the rest of the bike. Welcome to FOA too

Bloody love this bike. Think I now wanna do the same handlebar set up to my felt tk3! Would be great for long flattish training rides and commuting. Did you do anything to the second unused brake lever? Like pinning it somehow or similar, or is just on there as it came?

Thanks for all the comments everyone! Much appreciated.

I think the silver 75s are growing on me… they were supposed to go on an NJS build but I think they are pretty well suited to the Rourke. I did have a silver Pearl on there but it didn’t look right so swapped for a longer black one. Colour >>>>>

@drozzy - 69GI is pretty spinny non?
@P!N20 - #slamdatstem and yes original fork. The first owner did have the frame modified so it could take gears. The frame was drilled for a front and rear brake and added hangers and guides. I had them removed when I got the frame resprayed. I didn’t like the levers at first, but now they are growing on me. I hardly use my front brake but the hoods are great for climbing.
@r33prman - do it! And no, I haven’t touched the dummy lever. I know with some levers you need to put a biro spring in to stop them flapping about, but maybe not with Tektro levers. These are the Tektro compact levers for small hands.

Big fan of dummy levers on a fixed gear ridden on the road. Fits the purpose, no bullshit.

I am heaps looking forwards to seeing this when I’m back in Perth in June, Shelby. Pretty lame about the scratches from transit but it still looks the goods.

Cheers Mike! Looking forward to you getting some decent photos of it

I like to think of it as ‘fun-sized’, ha. Gotta make do with what you’ve got when you’re 5 foot nothing!

Luvly, I preferred the roadie version though.