I’ve listed some stuff on eBay that some of you may like or find of interest. I’ll be gradually clearing out the whole shed so check back for more goodies. There’ll be lots !!!

Your “Shed” is a goldmine

Btw … if any of the FOA mafia are keen it’s Ok to PM and ask me (did I just say that?).
There’s no harm in asking

Your “Shed” is a goldmine

What BCD are the C-Record Cranks Spiz (Stupid q i know)?

What BCD are the C-Record Cranks Spiz (Stupid q i know)?

135bcd. Hook up with a Fyxo for a custom track chainring made in this BCD size, strip the ano and polish the bejeezus out of these for a killer track crankset. Or just ride as is.

Love those Rino pedals and the Shimano centrepulls!.

Man, those centre pulls are beautiful.

Love those Rino pedals and the Shimano centrepulls!.

I used to have a really nice set of those. 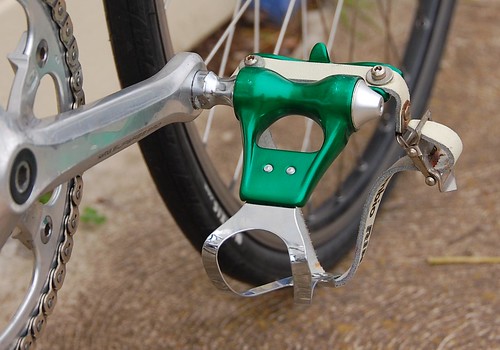 Man, those centre pulls are beautiful.

no … but from the reports of those who’ve used them they’re not very good. just sayyin’

make me an offer son, wiggle room for Mooderators on some items

The Rino pedals are cool, very pretty … so neatly styled compared to all the other stuff at the time (just ask Blakey who has the Irish team issue).

This, they’re the pick of the brakes I’ve listed imo … along with the 105 non aero levers.

Hey Papa,
what’s the reach on the DA centrepulls? And it kinda looks like they’ll take modern cartridge pads: yea or nay?

what’s the reach on the DA centrepulls? And it kinda looks like they’ll take modern cartridge pads: yea or nay?

47-65mm. Yes, you could run modern pads if you wish without too much trouble.
But, I’m gonna kill a sale here and say they’re best left and as is on a period bike so it’s all matchy matchy, esoteric and cool.

And for the best results have centrepull boss posts brazed onto the fork and seat stays … that way you do away with the backing plate, attachment bolts and make the brakes very stiff, effective and light overall. That’s a killer brake combo … ala herse/singer. Eliminates all shudder, makes for very responsive brakes with little or no flex.

Fair call. I’ve just got a wonderful mongrel of a commuter and something like that would be ace, but I see your point. Possibly slightly too long in the reach department anyway.

no … but from the reports of those who’ve used them they’re not very good. just sayyin’

Yeah but don’t they look good though.

Mafac Competition. They’re usually a shorter reach and are one hell of a brake. + Koolstop now make exact copy pads to fit in the holders. All that equals awesome brakes and Mafac use all metric sized bolts/nuts.

If you’re super lucky … you’ll score a set of Gran Compe’s but a lot of people are looking for those. I have a set of them squirreled away for Mrs. Spirito’s touring project. I still rate Mafac’s higher but the Gran Compe’s are really pretty.
Bikeville thoughts: Dia Compe Centerpull NGC 450 sold
brazed on. A lot of customization here… | Flickr - Photo Sharing!
velobase.com/ViewComponent.aspx?ID=B5AD44F0-FB61-4CCF-87AE-563C942C3B97&Enum=117

Lastly, you may be keen to have a crack on these when I list them. Sure are pretty. If they weren’t a rarity I’d fling them your way but I’m keen for $'s on these.

If you have to go shorter reach than 45mm then sidepulls are the only option.

$115 for record cranks! Damn, I couldn’t even get one bid last week on eBay for mine with a entry price of $60 with chainrings…
Pricings a bit rich… But whatevs, goodluck