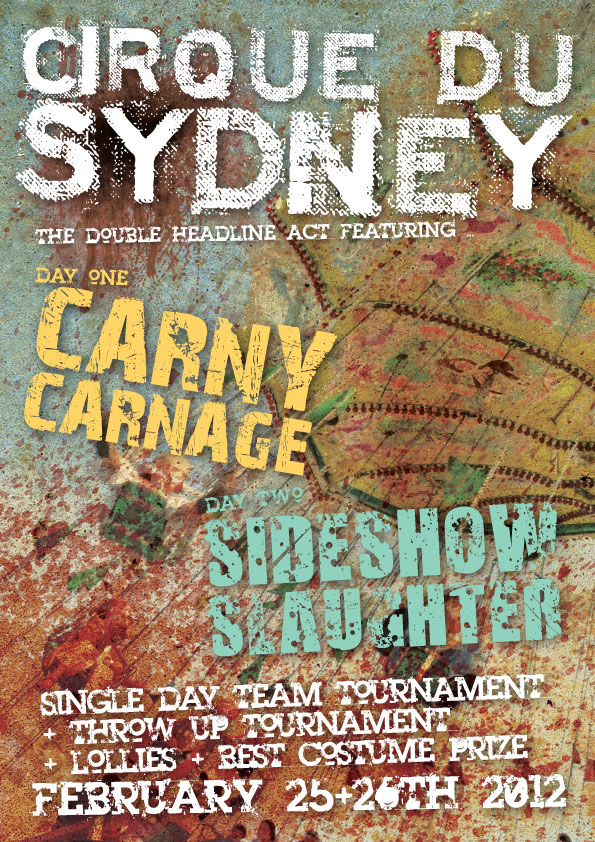 “Cirque du Sydney” is an action packed double header weekend guaranteed to entertain. Getting back to our roots, the tournament will be relaxed, all-inclusive and filled with events for both the players and spectators to enjoy.

“Carney Carnage” is the big top event on the Saturday. A single day Teamed Tournament. “Sideshow Slaughter” is the relaxed individual tournament on the Sunday. The tournament will be a throw-up format, with each game randomly drawing two teams of three. Dress up in your sideshow best as COSTUMES ARE MANDATORY!

We are still in planning for the Friday night party, and will hopefully have a warehouse shin-dig and 1v1 ‘knife fights’ court running. Saturday will be from 9am to 6pm (we have lights in case it runs over) and Sunday begins at 10am with a stricter 5pm finish for those heading to the Airport.

Rego info will be posted in the next week so check back for details. Further info at Sydney Bike Polo and on our Facebook page.

This is great and I want to witness this kind of event.

Good warm up for the nats in March. Pretty sure there is a team or 2 from Perth heading over for this!

There are indeed 4 players coming from Perth.

This will be a FREE tournament however we will be collecting donations (hopefully) from all players and spectators to send to Perth to help them fund AHBPC2012.

There are indeed 4 players coming from Perth.

PCP thought we would send our shittest players (Freakshow) over to gauge the talent in the lead up to the nationals. Word on the street is they did alright!!

PCP thought we would send our shittest players (Freakshow) over to gauge the talent in the lead up to the nationals. Word on the street is they did alright!!

Consider me officially psyched out if they were your shittest players

Freakshow are a great team. Very happy to draw against them. If there was a prize for best dressed team, they would have taken it on the second day. At least Ned got a prize for his spectacular outfit - it seemed to be causing him a bit of pain by the end of the day
SYD_2861 | Flickr - Photo Sharing!

Bahahah I bet Ned has been itching to wear that thing in public, since forever!!

Oh Ned, he has such soft lips HA HA. I hope he rocks his cape & cravat (sp?) at the nats here… Or that might just be Friday/sat night when we are out! HA

Oh Ned, he has such soft lips

More photos here Flickr: CirqueDuSydney including a few rare shots of Scott Dmello without his sunglasses and actually standing up. Didn’t get any of Mattie in a blonde wig and dress but I’m sure somebody else did.

Great shots Virginia, looks like a good time was had by all! Bring on the nationals!!!

Bring on the nationals!!!

Less than a month to go! Can’t wait to catch up with everyone again.

BTW If Sydney ever decides to host nationals, we will definitely make it dress up - how can you get angry with a guy in underpants and a cape