Hey, so me and wifey are taking our bikes to Japan in November to do a short (7 day) credit card tour.

We are landing and departing in Osaka and are keen to get some tips on direction. Initially we were going to ride to Kyoto then up around Lake Biwa, then down to Nara and back to Osaka.

Not so sure now though, I hear Lake Biwa is kind boring to ride around, and it’s literally just city between Osaka and Kyoto.

I’d look at going out away from the big cities to ride. Can waste half a day negotiating the bike paths and roads getting into them.

However having ridden into and out of Kyoto it’s not bad. I’ve ridden up the Eastern shore of biwa heading to the Alps it was ok, but from memory south of Kyoto towards Kobe was much nicer but hillier.

Me and my partner did a ride around the Noto peninsula on Blakey’s recommendation. Was very good. Some days were only 35kms, and only two significant climbs.

Another good spot to consider is Shikoku, great riding around the coast and more chill than mainland Japan I found. 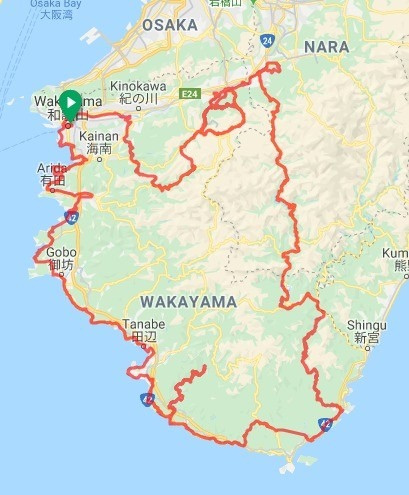 This is what we did earlier this year. Wakayama prefecture is aces to ride in. If you want coastal / alpine / river valleys it’s all there and you can choose your own adventure easily. The local govt is very keen to get more cycle tourism and are promoting their routes and attractions through the Wakayama800.

We flew into KIX and staged out of Guesthouse Rico in Wakayama.

Box size limits at KIX for takkyubin are 240cm total (L&W&D) which is tight for a full bike setup. Instead, take a limo bus from KIX to Wakayama station, it costs less than train or takkyubin, let alone both together.

Taking your bike box on the train is not only very difficult with gates stairs and full carriages, but it’s also very bad form. You might not be denied entry or expressly prohibited but don’t be that guy.

Guesthouse Rico stored our boxes and extra luggage for a flat JPY1000, and even better they shuttled our bike boxes back to the bus stop on the return trip which was

The river valleys in this area are stunningly beautiful, we detoured off the ‘blue line’ regularly to ride up one or another.

There are plenty of photos here: https://www.instagram.com/ah_blake

I mean, who wouldn’t want to ride into this Miyazaki looking village and stay in a small B&B filled with Shikoku pilgrims and soak the road grime off in the onsen

I wouldn’t suggest literally credit card touring here as you will be SOL more often than not. Electronic payment is just starting to take hold, but its pretty fractured right now with about 100 different companies trying half-assed at it, with loads of different apps and CC are not excepted at most places. If you just meant buying everything as you go, not keeping a stock of food and what not on you, you’ll be fine. Rare is an area in that region that doesn’t have a convenience store within a 5km radius.

The eastern shore of Biwa, from Otsu on up till about Hikone Castle, is pretty miserable with traffic and rundown old towns, unless you really hug the shoreline. From Hikone, up around the north shore, it gets into some hills, but also some very long tunnels (luckily with elevated walking/biking platforms, but still really loud and lots of car exhaust), and then out of the tunnels its really quite nice. Quiet, save for the small town here and there and other cyclists/bikers. About half to 3/4 of the way on the southwest side, you start to hit more city, traffic, tour buses, etc. again.

Last year I took a group beercycling/brewery/pub hopping from Southern Osaka up through Minoh (pretty nice if you go all the way up into the mountains) and then over to Kyoto. The Minoh to Kyoto leg was half suck (high speed traffic), half farmland and quaint Japan. That really is the problem with riding anywhere around the old and current capitals (Kyoto, Nara, Nagoya, Tokyo). The sprawling development and blight really doesn’t stop till you hit uninhabitable mountains or ocean, and there are few surface roads between. What might look like a 2-lane back road on a map could be packed with trucks and heavy traffic.

^^^^^ Wakayama loop would be pretty sweet. I can also suggest heading across the inland sea from Osaka or Kobe and ride around Shikoku. There is actually a proper bike route that island hops over there and a lot of bike-centric hotels and what not.

You can basically take your bike on any train, any time. Just stick to the back or front and make sure its at least front wheel off and wrapped. Some train station workers don’t care as long as dirty parts are covered, but others will get in your ass about something like a seat sticking out. I’ve used a “rinkobukuro” to take various bikes across the country on cheap train tickets and the bullet trains. Never had an issue.

I wouldn’t suggest literally credit card touring here as you will be SOL more often than not. Electronic payment is just starting to take hold, but its pretty fractured right now with about 100 different companies trying half-assed at it, with loads of different apps and CC are not excepted at most places. If you just meant buying everything as you go, not keeping a stock of food and what not on you, you’ll be fine. Rare is an area in that region that doesn’t have a convenience store within a 5k…

Yeah i mean that figuratively.
We might head south from Osaka then to Wakayama, then to Nara and back.
i have to take a bunch of reference pics of urban areas and “half farmland” while im there as part of a project im working on. so shitty areas are a must.
then into the mountains
going to do more research.
Thanks for the tips, ill be back for more questions after ive looks at google maps some more.

Continuing the discussion from Credit card touring in Japan:

Noto sounds good. i know what you mean about riding through the city areas. Weve hired bikes in Osaka before and it was pretty hectic. Nara was alright for riding i found.
Did an Alleycat in Kobe on 09 that was to ride around. but Osaka and Kyoto were hectic.

cant wait to do rural areas

Thats a massive loop @AL9000, i think maybe we’ll cut through the middle of that route up to Nara. As i said, i’ll be back with more questions after some more research.

Youse are the best. thanks heaps. been riding blind (no pun intended) on this until now

cant wait to do rural areas

You’ll love it. And I can’t wait to see what you end up drawing. There are a lot of citrus growing areas in Wakayama, and plenty of rice paddies, tea, small and medium veg plots…

Also go to a Komeri (コメリ), it’s like bunnings and harvey norman mashed together but if they weren’t shit. You can pick up a set of the lovely pastel work wear that all the old boys are wearing in the fields and cruising around in kei trucks. I tried some on but the proportions were all wrong for me which was such a bummer.

If you’re heading towards Nara, you can also pop up to koya-san by train and cablecar from Hashimoto, or ride up the mountain. it’s heckers touristy but as always, move one street off the main drag and it changes entirely.

this forum is back baby.

this forum is back baby.

what are you up too these days.
You an Academic? did you do a PHD?

literally just finished one like two weeks ago fml.

literally just finished one like two weeks ago fml.

what on?
Are you going to be an academy man now. A life of shitty university gossip and politics?

will dm u so I ant clog up thread.

Seriously? This is most activity FoA has had in months.

So it’s all booked. Routes are done. Bikes almost ready.

Anybody got any good recommends for bike touring insurance. In case our stuff doesn’t show up or stolen or broke. I have no idea about this stuff. Gldid some googling but thought I’d see if any of you have a recommendation
Cheers

Did you pay for your flights with a credit card, and if so does it happen to have travel insurance included?

Do you have contents insurance, if so does it have coverage for items away from home?

@a.davis12 who did you use that time you needed to claim and were they not terrible?

IME the insurance to cover a specific $$ bike (as it’ll have to be a declared item) gets spendy fast with high excesses and low payout caps, I roll the dice and self insure, but take out personal travel insurance in case of medical emergency.

Travel Insurance Direct (TID or maybe something else entirely now).
i didn’t take the cover out for contents though, i took it out for medical and they definitely looked after me, like $22k including a helicopter, a flight to thailand and two different hospitals.

I have used Online Travel Insurance… we got a few grand back from when we had to come back to Canberra from Tassie when Vee’s mum had a heart attack. One thing I have learnt from this though is be careful with paying for flights with points as they aren’t refundable.

Check the travel insurance you do get covers bike accidents, some don’t. It’s in the fine print