would any body here be keen to grab some beers somewhere on the weekend?

i’d like to have a nice and simple meet up (not necessarily a ride) where we can all get together and hang out and talk bikes and random shite so we can get to know one another - with the warm weather just round the corner it’d be awesome to have a tight group of bikers to head out regularly with.

also, i’m sure we’ve all got builds lined up and between us all i’d say there’s alot of knowledge, spare parts and tools floating around to get alot done over the coming months.

i’m a real tight arse and would love to bludge off friends collective knowledge and collective toolkits (and yes, i’m more than happy to give back all that i take where i can) - problem is i don’t have too many friends that i can bludge this sort of stuff from.

i know there’s a few fixie groups in canberra but they all seem really hard to get into - some sort of exclusive memberhsip i think - plus i don’t think i’m cool enough to hang with some of those guys, so this is my attempt at bringing the canberra fixed.org peeps together.

so post your ideas, thoughts etc in this thread…

again, tl;dr - drink beer with me and be my friend so i can bludge your tools.

I didn’t realise there were a number ‘fixie’ groups in canberra, if there were… we would have to be the coolest cats around eh.

But anyway… No can do this weekend, just the biggest MTB event this city has seen!!
https://www.mtbworldscanberra.com.au/

I know a few of the guys off here will be rolling to that. I have a couple of busy weekends in the months ahead, but yeah I am up with the idea of reg rides.

Yeah come out to Stromlo on Saturday - I’ll be out there with Rat Patrol, should be a laugh (or a gory tangle of broken limbs).

Crazy busy with this and organising Tweed 2. Otherwise I’m happy to meet for straight-up beer rides in a couple of weeks.

Yes, Canberra fixie riders are a very strange bunch. In fact, of the six cities I’ve lived in in the last ten years Canberra riders in general are the least friendly and most competitive/arrogant, and i thought it would be the opposite.

There is at least four groups of fixies i have heard of since moving here, none that actually do anything regular or that mix with other groups. Kinda weird.

Anyhoo, i’ll be at the Nationals on the weekend so no can do.

Maybe next Saturday??? The Royal Hunt is on but i suppose it depends on how cool you are as to whether you’ll go or not :lol:

I’ll be volunteering at the worlds all weekend but a meet would be good.

Organising a regular, perhaps night social ride would be awsome.
Normally I don’t get to ride with anybody.

We should meet up at the worlds for a few beers. I will be there on Fri / Sat / Sun

Sounds great Trev,
Im definitley keen for a drink and would be really keen to start doing a social ride at nights now it’s getting warmer!

Wasn’t planning on going to the Worlds but could be persuaded, or I’m more than happy to meet up at a pub somewheres. Got a mates wedding on saturday but am good for doing something on sunday though.

Ive actually just started a new build, picking up my frame tonight from a friend who stripped it back to bare metal for me. Was going to start painting it on sunday but might wait until it warms up a little bit. Would be great to talk to some peeps, get some tips etc. I kinda flew through my last build by the seat of my pants.

Meet at world champs? YEAAAAAAAAAAAAHHH!!! I have been everyday so far and have loved it… a bit too much sun yesterday, but that just feels like summer! my pics on 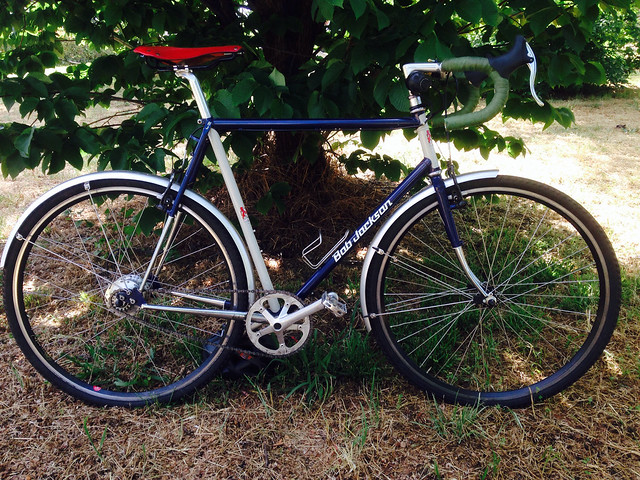 I have two melb fixed.org heads arriving after midnight tonight, which is pretty late for me… so the wife and i are getting drunk and piss-taking everyones bikes on FGG. anyway, the melb buys are great and i am sure would love to see/meet you guys too.

Trev, I have a lot of tools and you can use/borrow them whenever you like. I even bought a round file on the weekend, thinking that i had lost my old one, but i found it again, so you can HAVE the new one.

I bought another vinatge roadie today, which is a touch small for me, but reynolds 531, lugges, record LF hubs, Suntour superbe/cyclone bits, sugino mighty crank, cinellit bar and stem. I would like to swap for a fixty that fits are works and is pretty cool.

If anyone wants to come round to mine right now, do it! msg me for address. I have 9 bikes in the shed now.

If anyone wants to head out to the world champs, let me know. I have a few tickets spare… conditions are, I am not traveling to you, you have to pick them up from me. Mostly tickets for Friday and Saturday. Sunday has been too popular with the Mens final DH.

hey jp - thanks for the offers man, i may have to take you up on it

let me know when you’re free and i’ll bring some gear around.

any preference in beer?

Dont worry about beer mate, just come round! Anytime is ok with me, though i am usually not home til 5pm weeknights. Let me know what you are thinking of doing so i can make sure i have the tools you need

Thanks jp :lol: I’ll get what I need to do in order an I’ll text you to tee up a time. Wheeee!