here is where i started (admittedly 99% of the hard work was done for me!) http://fixed.org.au/forums/index.php/topic,4965.0.html

and here it is now:

the chopped bars and fork are off a hard-rubbish ‘Roadmaster’… the brake is a cheapie setup from abbotsford cycles. the powdercoat is from Bell Powder Coaters… so so result.

rode it to work today and it is an absolute hoot - way way better than the mountain bike i have been riding.

still getting used to the pedals continuing to turn regardless of what happens… but so far i am loving it.

ok… not having much luck posting photos… keep getting an error message.

ok, let’s try this as an interim solution… 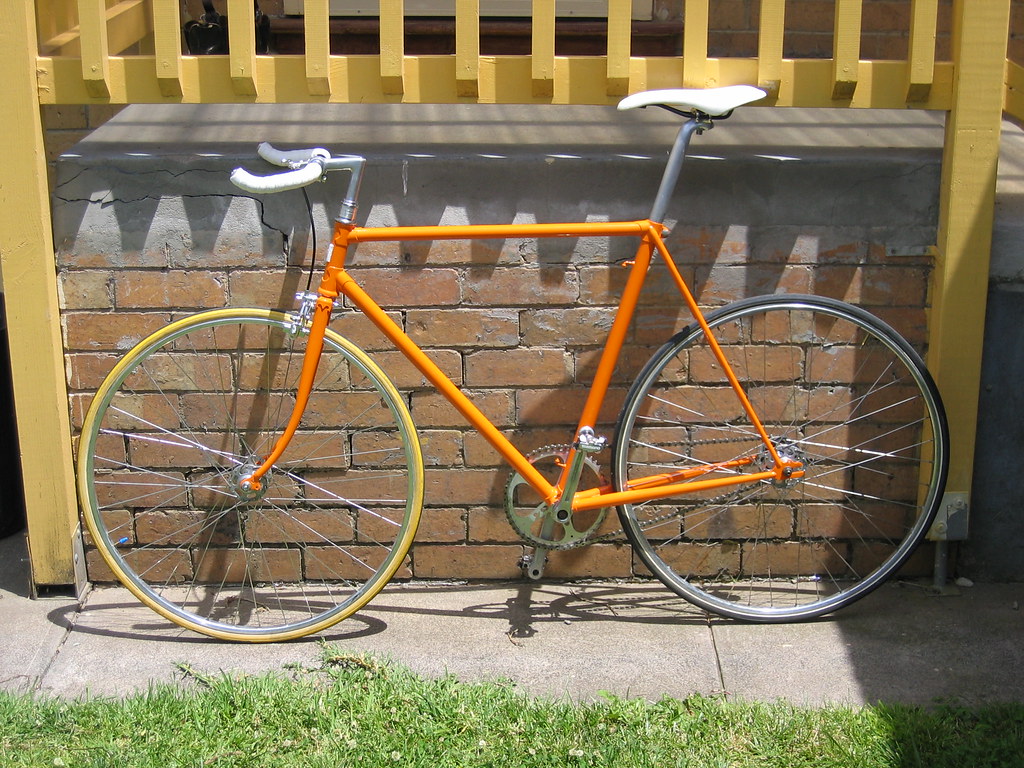 did the first commute and it was great. need to re-learn how to ride (like not trying to coast over bumps - very bad!). Nice colour. Reminds me of sausages.

What you really need is a bigger frame

Nice colour. Reminds me of sausage.

What is going on with the stem into the steerer?

thanks for posting the pic LAM.

yeah i think the seat post is a bit higher than where i am riding it at the moment… took the photos before the maiden voyage just in case something went horribly wrong and have done some adjustments since.

i’m 6 ft 1in - so the frame might still be a bit on the small side - 56cm seat tube, 58cm top tube… doesn’t feel uncomfortable and haven’t got sore wrists from today (15kms x2). Presume that means that 56cm seat tube is too short and on the next ‘build’ i should go something like 58cm?

the stem looks a bit odd because it is. the 27" fork is slightly too long (hence the spacers)… gotta get up the courage and cut the thing down to size. thought i would at least ride it before butchering it (like did the handle bars - thank god for bar tape).

Cheers Rohan. guess i might have to think about another build…

just what i need, another disease… :roll:

i guess it depends on your body type. long on the bottom or long on the top like peter daicos.

i guess it depends on your body type. long on the bottom or long on the top like peter daicos.

Is that a trainer tyre on the front??

Wow! Well there you go… Mine is actually 59 c-t so is probably closer to 58 c-c. This is probably a fraction to small for me, will go 59 c-c next time.

skippy, nah it’s a gum-walled road tyre… doesn’t match the front as it’s in pretty good nick so only got a new rear fitted (haven’t taught myself how to do tubeless tyres yet).

Not much stem or seat post stuffed into the frame :-o

I was hoping someone had tried them out. Probably not on the front but maybe on the rear

presume trainer wheels would just get shredded on asphalt? (looked at a nice matching orange set…)