That stem may be higher than its minimum insertion point though?

Very nice.
It looks exactly the same as my first biuld.
good work.

6’4" need the height, head stem is inserted to minimum length.
RELAXED??? not sure what that means

relaxed, referring to the steering geometry, which is slack as.

well, he actually may have been referring to the seat tube, but something like that

relaxed, referring to the steering geometry, which is slack as.

No implications, other than having to put up with people who think you aren’t hardcore because you aren’t running a set up that is “steep and tight”.

just took it for the first ride. seems ok to me, actually seems amazing

finally got around to update of my bike. few things kept from original, frame, saddle, crank/pedals.
HUGE thanks to Sasha at Pony Bikes.
Got frame powder coated. Love the white so kept it. New forks. S/H Bianchi stem that was lying around at Pony. Nitto track Drops. Soyo grips through Dan at Shifter.
Sasha built my B43s laced to velocity fixed/fixed hub. bangin’
http://ponybikes.blogspot.com/2009/11/pony-bikes-and-aarons-gordonson.html 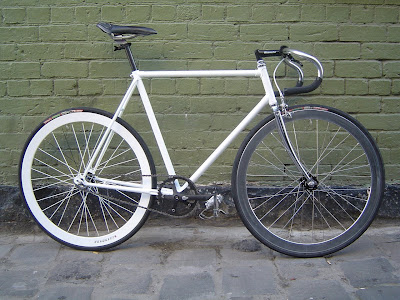 The new fork has done the trick!

Is the rear wheel smaller than the front? Or is that some wierd optical illusion with the grey/white combo?

Think its the camera / bike angle. The front wheel looks like its “one brick” closer to the camera if ya look at the ground beneath.

your bike looks like its on Smack is all.

but thats fine, nuthin wrong with a cap or tow of Horse every now and then