I might just be able to hang with those quick guys if I was at my very best. Saturday was not that!

Speaking of dubious sensations, first race back last night after 6 months. 30km out-and-back handicap. It was blowing a mad Westerly, which meant cross-winds for most of the race. I ain’t built for no cross winds. Was in second scratch with three others - all way stronger than me, and we only had 1.5mins on the scratch bunch. After 15 minutes of track turns above threshold (41km/hr, ugh), I popped, then had to roll the last 20km solo being blown all over the road. Tried to jump on the scratch bunch when they came past, lasted 1 minute at 400W then gave that up.

is your name James Kent circa 2011 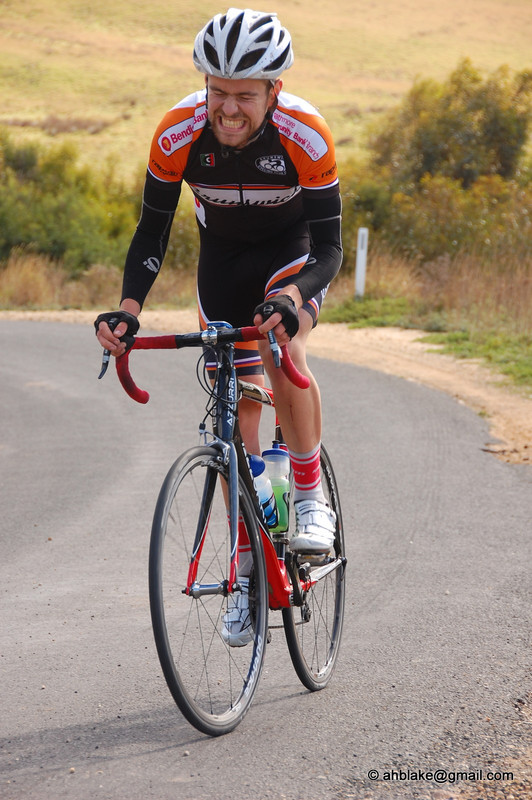 What a time etc.

Fkn won a crit last night. In a sprint. The world has now truly gone mad.

holy shit!!! more details Dave. It was the Donna repeats in 2012 wot done it.

Started back at crits last week, and snagged a 2nd in B Grade, but it was only a field of 6 and one guy had soloed off the front and stayed away for the win. Two others got dropped, and I attacked the remaining two half a lap out to get clear 2nd (heart rate hit 200 coz it was 35 degrees. Haven’t seen it that high since the glory days at the Teardrop).

This week they were gonna put me in A Grade, but the field there was absolutely stacked - Lappers, Shooter, Banger, Stolz etc (you won’t know who most of those guys are, but trust me when I say they’re quick! Lappers was obviously National Road Champ in 2007, and Shooter is a regular in the Bendigo Madison). Thankfully they left me in B Grade.

8 in the race, which was just enough to make it a little bit tactical. I got some pre-race tips that Rick had been showing some strong form lately and to follow any moves he made. After 10 minutes he was 30m off the front so I bridged across, but they chased us down a lap or two later. After that I sat in and conserved energy. My mental state was fluctuating between “this is shit, I’m gonna die, why am I doing this”, to “fkn hell this is so much fun”.

Last lap, I was in last wheel, and leaning towards the “this is shit, I’ll just roll in at the back” mentality. There’s a small climb about 500m from home, then a 90 degree left hander, a short 120m section along the top, then another 90 degree left hander and a 300m downhill run to the finish. I tried to come around them on the right side up the climb, but it was into a strong head-cross wind and I was getting nowhere, so I slunk to the back left side to get some shelter. Guys were drilling it up there, but I was getting a good sit. Took the inside on the corner and attacked across the top as they all tried to recover from the hill. Coming up the inside I slotted into third wheel around the final corner, with Rick in 2nd wheel.

I let a small gap go through the corner, accelerated into it and then out to the right of the two guys in front, where I got perfect shelter from the cross-tail wind. Stayed seated, spun at 125 cadence like a madman, and was surprised when I rounded em up fairly easily and won going clear. Just had the perfect sit from the wind - made sure I stayed right so anyone coming home late had to come past me in the wind.

might drive up to benders to see Dave getting absolutely drilled by Lappers.

They put me in A Grade, with Lappers and a few other hitters. It was so hard Lappers didn’t even win! I lasted 12 of the 40 minutes. The first 6 minutes were ok, then we had three real quick laps after two guys went off the front, and that was me done. Trying to do 500 watts up the hill in last wheel, and calling Lappers in as he rolls back looking like he’s out for a Sunday coffee spin. Fark.

Back to B Grade I go!

SOUNDS LIKE SERIOUS SENSATIONS TO ME. stay in a grade and increase by a minute a week.