ironhorse frame i found on the side of the road on a very drunken walk home. collected it the next day. was going to sell it, but decided to keep it. bought some forks and a seatpost and then put it together using stuff i already had. it’s awesome. doesn’t weigh very much. is comfy. shreds pavement awesome.

Sweet build. Some would say overcapitalised for a curb frame, I think it’s rad.

Not really into MTBs but i dig it.

Me too. Interesting frame !!!

thanks guys, not really a mtber either, knobblys on road is fun though. 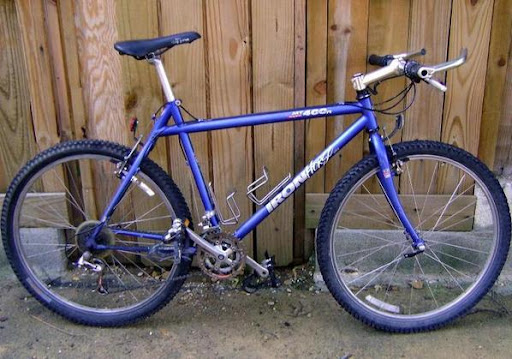 is what it started as FWIW, except with a rooted elastomer suspension fork.

and this was frank 1:

The big question is, when you were drunk walking home and found it… Why didn’t you just ride it then ha ha!

i tried, but there was no front wheel or rear tyre

Pretty sure justdave had an Ironhorse he converted to fixed too.

That seat makes me happy.

has a flip flop hub, so could be fixed.
it’s more fun this way though

Pretty sure justdave had an Ironhorse he converted to fixed too.

Sweet build. Some would say overcapitalised for a curb frame, I think it’s rad.

Agree. I had one of those iron horses a dozen years or so ago, in a lurid orange. Rode the hell out of it, still got some of the scars