anyone know of a shop in melbourne that sells these? i’ve tried BDC and cecil but neither have them in stock.

Is it ellipse specific?

I have a Campy (ISO thread, same as Phil/Miche, i.e. not DA/Formula/etc) lockring.

Edit: What am I thinking, it’s French. So it’ll be metric and weird right? like 30x1mm?

Is it ellipse specific?

I have a Campy (ISO thread, same as Phil/Miche, i.e. not DA/Formula/etc) lockring.

Edit: What am I thinking, it’s French. So it’ll be metric and weird right? like 30x1mm?

I just typed in ‘obsolete French cycling’ into Flickr and found this- I want one!

^^^ The Japs will pay through the nose for that stuff!! they get a real hard-on for French touring gear for some reason.

Suicide shifters are the new Potato.

Suicide shifters are the new Potato.

I’m getting a reputation round here

I’m planning to build a very funky 10 speed set up using the above with pre war Osgear Super Champion gears. This might take a lot of gestation before it comes to fruition. It was a kind of hotrod setup for some Oz racers on the late 40’s.

Dropouts are designed so that the forward vertical slot portion is used with the Osgear gears (the long tab is to protect the chain shifter/fork from being damaged or bent with wheel removal) and the horizontal rear portion is used for fixed gear with the wheel flipped as it allows chain tensioning. It’s fiddly and eccentric but I find all that weird stuff is quite interesting.

Got the bits but other projects have first priority. This one’s gonna take a whiles. 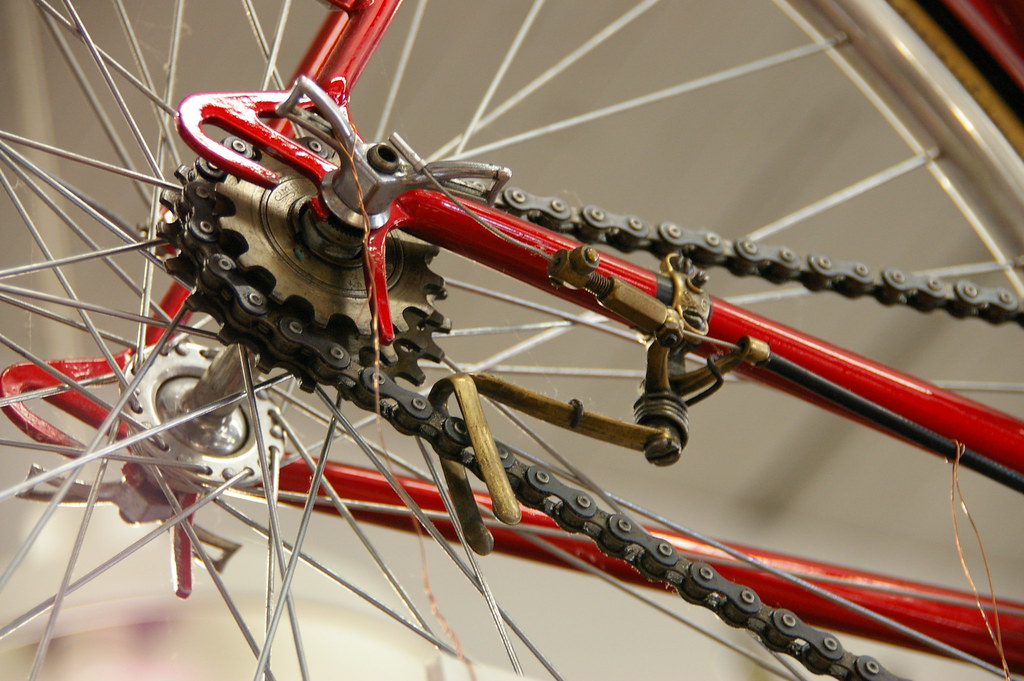 i didnt have any luck finding these lockrings locally either, and i did a bit of searching. i found them pretty cheap internationally and i still need two, so if you want to combine shipping with me let me know. i’m in no rush cos at the moment i’m only using the ellipses on the track where i dont need lockrings but i still want some.

fitzroy revolution has the goods. i’ve ordered one from another store as well. so i got a spare.

did they have any more at the other store? carnegie?

nah, the one on brunswick street. i didn’t ask if they had more, but i think i heard the guy say “yea, we should have a few of these” as he looked up their computer. maybe give them a call?

I ordered mine through the at Deus. Descent price too.
Yes, Mavic/french threaded Pista stuff is pain but it’s sooooo pwetttyyy!