Ok, due to popular demand, meaning someone asked… here is my new fixed gear bike.

The frame and fork are vintage Peugeot, circa 1972, owned previously by my father who has had it sitting in his garage for at least 20 years without being touched.

Doesn’t seem like I’ve written enough there… perhaps that’s my MTB forum background showing through, the spec on my DH bike for example, reads like a small novel.

The bike is about to be sent to KookieBikes for a major frame overhaul, lots of chrome and colour being thrown it’s way so it wont look like it does here for long.

Anyway, it’s my first fixie and I’m very happy with the way it’s turning out.

Looks like a nice ride. You should be leaving that frame exactly as it is. It’s fine.

On another note, how long are those chainstays? Very comfortable.

I do like the frame the way it is but it’s got a few rust spots and the paint is very tired.

It will have new decals and all the original badges. I’m not changing it completely, just revamping really.

Without raining on your parade, I don’t think it’s a PX-10, the dropouts are stamped, not forged. It doesn’t really mean anything apart from a few hundred grams though.

This link, and that pogueamahone chap on bikeforums.net should be able to ID it in a flash.
http://www.classicrendezvous.com/France/Peugeot/PX10_history.htm

Regardless, it’s very nice, and if you restore it to the original paint scheme with fresh chrome and decals too it’ll look tops.

There is a bit of rain about, not here in Brisbane still bucketing the garden!!

Looks like a UE-8, the radonneur version of the UO-8. The absence of integral derailier hanger and chrome on the rear stays cuts out the PX10, the brazed pump pegs and generator bracket suggest the UE-8. The decal set and “Aztec” lugs are consistent with 72.

A nice ride, best thing to do with it - ride it, enjoy.

There is a bit of rain about, not here in Brisbane still bucketing the garden!!

Looks like a UE-8, the radonneur version of the UO-8. The absence of integral derailier hanger and chrome on the rear stays cuts out the PX10, the brazed pump pegs and generator bracket suggest the UE-8. The decal set and “Aztec” lugs are consistent with 72.

A nice ride, best thing to do with it - ride it, enjoy.

Should have guessed you’d chime in with it’s lineage sooner or later.

Thanks for clearing that up, I never was 100% sure of the model, a shope here in Melbourne that I used for getting hold of old parts told me it was a PX10 but wasn’t 100% sure either.

Thanks for clearing that up, I never was 100% sure of the model, a shope here in Melbourne that I used for getting hold of old parts told me it was a PX10 but wasn’t 100% sure either.

Rogaine is the only definitive source for Peuguot genealogy in Australia.

It looks so… long, but I do have a thing about those bars being way too long (which is why I chopped mine).

Sticking with all the hangers and knobbily bits, or going the chop? Hmm, I think I’ve just realised that perhaps I like cutting things down/off a little too much.

DON’T CHANGE THAT FRAME - ITS BEAUTIFUL

If your going to repaint, do a restoration. Theres a real quality about the graphics and colour combos of the frames of this era.

But the rust spots etc could be sanded back sealed and touched up.

my two bobs worth

I’ll be removing most of the hangers but will try and do it so that they are all still intact. That way I’ll have them if I ever decide to put all the original gear back on, guards, dynamo, rack, etc… Which is a tempting prospect but the guards etc that came off the bike are very rusted, possibly beyond repair.

Finding replacements would be almost impossible I’d imagine, either that or insanely expensive.

I just like my bikes… simple (and simple always seems to involve a hack-saw and file).

If you’re gunna remove all the lugs, strip and re-paint - and yes, if I was to re-paint a fixie I’d take everything not necessary off - you might as well discard the bits, the reality is that you’ll never want to, or be able to afford to, restore it to original. Removing lugs intact is best done by torch and unless you’re good at it you risk compromising the frame, us mugs can cut 'em off with an angle grinder and finish back for painting pretty easy.

If you’ve got a decal set, and they’re available, the finished job will stunning. The headtube badge is a wonderful start! Personally the oranges/yellows of the seventies have seen their day, I am pretty black and white these days!

Keep us in the loop.

I do still have all the original parts, although they are quite rusted. I think they could be re-chromed, depending on how much metal comes off in the acid bath.

Could be worth a go though.

Might check out the cost of getting them done at the same time as the rest of the work. Then just hang on to them until I decide whether or not to use them. 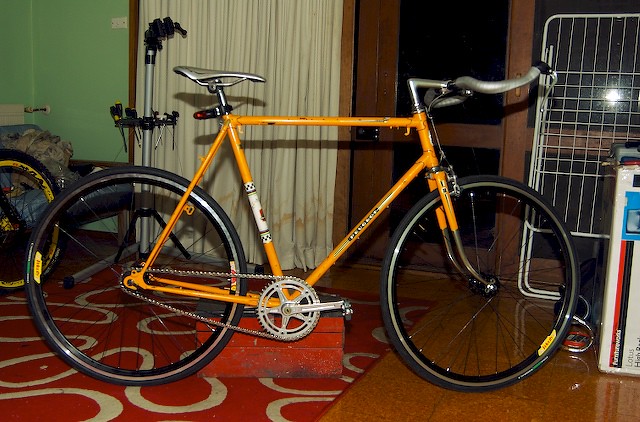 Hopefully it will be back from the chroming people by the end of the week, then it will be painted and I’ll get it back. So with any luck I’ll be joining the
Saturday morning ride in 2 - 3 weeks.

do you need to get it bead blasted before the chrome? looks like you did a good job cleaning her up!

I’ve actually taken the easy way out and not done the work myself.

Matt from Kookie Bikes is doing it for me. 8)

giesler at bike barn on chapel st fitzroy has hand beaten metal fenders for a fee.

It’s back from the chromer and I have some pics. 8)

Paint should be done by the end of this week with any luck.