Not really a help request just wondering if others have seen much of this. Did a full rebuild on a bike the other day to get ready for a sale, quick shake down and there is some awful noise coming from the drive chain. Swapped out the wheel for another I had laying around and it went away so next I swapped the cog out and presto, noise gone.

I replaced a Phil 17t with a Phil 17t, neither was particularly worn but once I pulled off the old one I noticed the teeth appeared to be bent, not side to side but radially. I haven’t encountered that before, here is a couple of pics: Given the lack of general wear on the cog it hardly seems like it could be wear it really looks like they were bent, presumably somehow from too much torque but there is no way I could put enough torque on a cog to break it I would have thought.

Other possibility is a manufacturing issue, which seems to be not out of the question with Phil stuff but was wondering in general if others here are seeing this. Maybe I was just overzealous with the chain whip but again I wouldn’t have thought I could manage that.

I’ll chip in seeing as no one else has. Are you using a 1/2" chain? If you’re using a 3/16" it may be sitting near the top of the teeth instead of sitting down into the the cog.

that cog does look to have some wear. -although the photo may be distorting it

was it that cog with a new chain?

was it that cog with a new chain?

It’s likely had a couple of chains but not due to wear, more to being swapped around the place. The chain I was running most recently on it was not brand new cut I would say only had about 50km on it. Of course that is not ideal, I usually prefer to know the full history of all of the bits but I was basically putting together something for things I had around.

Interestingly the Phil cog I ended up putting on that was silent had probably less use but not by a huge margin. Somehow I seem to have butchered this cog, just trying to work out why but I guess without knowing the history of the part myself it’s a bit tricky. Was curious as to whether others have seen this happen to a cog to.

I had an old Dura-Ace cog that did this, but to be fair, I put it through the wringer.

It seems like wear to me. If you look at the chamfers at the end of the teeth they still appear to be at the right angle, but the wear lower down on the tooth all on the same facing sides of the teeth make them all appear bent in the same direction??

Maybe its my monitor though…

I tend to agree, it looks like its shark-finning near the beginning of the teeth, looks like it’s been used with a worn chain to begin with almost.

Cool, thanks for the sanity checks from everyone, good to get another set of eyes since I have been going a bit cross eyed looking at it.

I don’t remember running it with an old chain but it’s definitely possible. I guess I should be a bit more diligent about keeping track of what went where and when. I don’t usually let my chains get very old but definitely have played musical cogs on a few bikes.

Looking at a few other examples of shark fining (thanks, that gave me the term to Google, I couldn’t think of it) I think you’re right it looks like wear. I have seen some very similar results.

This one helped me visualise how it goes: 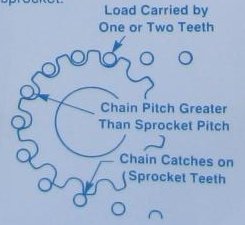