I’m looking to get some new road pedals to replace my old LOOK ones and have (kind of) narrowed it down to these.

LOOK Keo 2 Max - Good reviews but pricey compared to the others. Metal baseplate though, as I read the composite ones wear quickly.

Shimano 105 - I know a lot of the guys here use them and love them. Cheapest of the lot.
*The bike is Campag though, so tempted to not use Shimano on it.

Time RXS - anyone here used them at all? They seem to get great reviews.

I know you probably don’t want to mix rice and pasta, but you seriously cannot go wrong with 105 pedals and the cleats are not expensive to replace as opposed to other brands.
Unless it’s a show bike fuck tradition and go with 105’s

Be careful of the RXS’ …plastic breaks easier than aluminium. 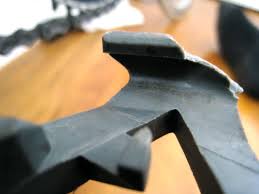 I have rxs pedals and am very happy. I am very happy with the pedals as well. they have a distinct snap and a firm hold but your foot can float about a tiny bit before you twist and feel the spring.

go the 105s - stack height is nice & low, the spd-sl cleats are cheap and easier to walk in than just about any other (road) system when you have to. I’ve tried a few types over the years and I reckon spd-sl are all-round good gear that works nice , is durable and is easy to deal with (3 sets in my quiver, 2 of them on campag bikes).`

+1 on the shimano. good solid stuff.

Speedplay FTW (if you don’t have timber floors at home)

Yeah Shimano FTW. Cheap and reliable. Captain Commuter speaks the truth.
Only a snob would worry about mixing Campagnolo with Shimano…

Speedplay are too PRO for both me and my bike. +1 for reliability.

Now, I was thinking about a seatpost…

For the record, there is zero difference between the 105 and Ultegra pedals, there is a slight difference in bearing interface for Dura Ace pedals.
Yet another vote for 105.

For the record, there is zero difference between the 105 and Ultegra pedals, there is a slight difference in bearing interface for Dura Ace pedals.
Yet another vote for 105.

Correct. I’ve got all three actually and if you look at the exploded assembly of the 105 and Ultegra, the pedal IS the same down to the last bolt.

If you look at the specs Shimano is a bit sneaky too as it lists the Ultegra lighter by a couple of grams… I’m sure in the real world they are the same.

i have shimano ultegras on my roadie which is full campy c-record. rally happy with them. from what i can tell, only realy difference between 105s and ultegras is weight and aethetics.

Is that a sport for non-religious people?

yep, owned both and there is only some slight machining which accounts for the small weight saving and the finish also differentiates between the two models.
Blindfolded you wouldn’t be able to pick between them whilst riding.

That’s good, as I actually do most of my riding blindfolded. Thanks for the advice. Looks like I’ll be joining the 105 club.

Thanks for the advice. Looks like I’ll be joining the 105 club.

Cheer up, Shimano actually works well as opposed to…

Ok, Nexus, I hope you don’t mind, but i’m going to lock this before this turns into a Campag v Shimano debate.

Anyway, we all know Sram is the bees knees.

Anyway, we all know Sram is the bees knees.

Locked already… until I can upgrade !