That is pretty bloody rad, dalai, I had no idea you were/are such a beast

so, vids, my favourite series is “reclimbing the classics” which is a series of vids that Mammut put togehter, getting current climbers to go back and climb breakthrough climbs of years past. Its a massive eye opener for me to see current day superstars struggling so badly on climbs that were done 15 years or more ago. Some of them dont struggle at all, of course

Also, finally watched slender gentlemen the other day, those guys seem so normal, makes me think anything is possible.

Another update, wife and I had a gym session at lunchtime today… not having two kids around and having time to spend getting into things seems to have been a key for her and she loved it. She’s strong and flexible and pulled some nice moves, even without much specific finger strength.

Final update, I’ve started building a trad rack. C4 cams 0.5 to 3, BD nuts and DMM wallnuts sets should all be here tomorrow. I finally bought a grigri(2) today, too… unsure how much I’ll use it, but will at least be useful when someone is on a project, or when kids are belaying (if that happens).

Edit: If anyone hasnt read “Revelations” by Jerry Moffat, you should do that… you should read it.

Lifetime ago JP! Grades I did 20 years ago don’t rate a mention these days… If you are bored there is an old Interview on Chockstone including some photos from back in the day!

The “Reclimbing the Classics” are enjoyable videos. Heading to the Reel Rock tour tonight in Melbourne. Worthwhile getting along to if it still hasn’t been shown in Tasmania yet. 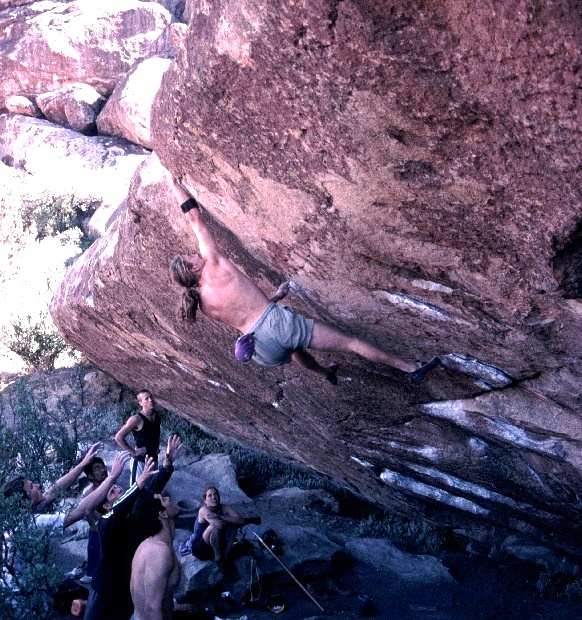 is that a sweatband or tennis elbow pressure band? Do you remember what shoes you were wearing back then?

tied up a couple of cordelettes last night, happy with my dressing of the triple fishmerman knots. Also made up a couple more extendy draws, theyre 4g lighter than my other pair (101 vs 97g), but amazingly, I can feel that difference in the hand.

Tennis elbow band - reason I retired back in 98. Blew out my elbows again…

Wearing and still thankfully made so back wearing - Five Ten Anasazi Moccasym slippers.

(about the shoes, not the elbow blow out)

I rigged my first ever anchor today, with my own gear even! Rapped off it, couldn’t get back up the crack that my mate did, so hiked back up. It was a great morning, but man I sucked on the climb. Had everything I needed except one more locking biner, but that’s taken care of.

Placed my own gear on lead yesterday. At orroral ridge in namadgi, a couple of granite cracks, cams and nuts all felt fine but one nut did shake free with rope drag. I might put together some more extender draws to try minimising that in future. Ocun crack gloves were sensational, did my first ever hand-fist stack, freed a stuck rope with some fun ascender-grigri action. Such a massive success and felt quite adventurous.

I’m in for three straight here. Perhaps this is just not taking off like I thought it would.

Climbed in the blueys for the first time over easter. Amazing how different the climbing style is in different ares on different rock but all at the same grade. The style (of the few climbs i did in two of many, many areas) was way juggier and steeper than anything I’ve done in the ACT or Tas, and seems to be more approachable for “generally athletic” people than slabs or cracks of the same grade. Anyway, it was interesting, and was a nice confirmation that I’m not getting worse. The slabs here in southern ACT are kinda scaring me, but am continuing to tick along with trad stuff. Also got some before work sessions going on river crags, looking forward to another 55min of light!

Still haven’t had a go at top rope self belay action, but got some static and a basic on the way so it should be soon. I got a bit tentative about using the shunt, even though i love it and love that it doesnt eat ropes.

I’m getting back into it! I’ve been training the last couple of months, mostly on endurance, but also mixing it up with hangboard and core strength sessions on the rings at home. Endurance is my weakness after some time out - I have fairly good strength move by move and can boulder ok, but I’m peeling off the longer steeper trad routes where the gear placement positions are not ideal.

Went to Eureka Wall in the Grampians over Easter. Such an amazing wall. This is my buddy rapping down Pythagoras Theorem:

Edit: I was also in the Bluies a couple of weeks back. I used to live in Katoomba, and as I remember I found it overgraded and soft! I am peeling off routes in the Grampians 3 grades easier than things I was cruising up in the Bluies. Sport climbing though.

Edit edit: And good work JP - keep it up! Getting good at climbing is a long game. Strength, technique, expertise, gear management, and a clear head - it all takes time. It’s good to practice some rope techniques at home if you can - a lot of that just requires repetition. I have some bolts on a beam at home that I occasionally haul myself onto to practice escaping the belay, etc.

Far out, how good is that wall! I’m getting closer to organizing a visit to araps in the cooler months, and hopefully i can get into the grampians for a bit then too.

And yeah, i’ll definitely be sorting the self-belay set up in the shed before heading out! A bolt set up in the shed is a good idea. I’m almost done building my crack machine, with widths of 19, 38, 57 and 76mm. I might put some bolts on the side.

Of all of my gear I’m loving my hexes the most, they feel so bloody good when set.

First solo top rope mission completed this morn before work. Light is running out, but I can still get a couple of routes in. The system worked perfectly, the catch is so quick with an ascender! I got some pretty severe rope twist going toward the end, but that was with moving the whole set up between anchors mid-way through the session. Took a heap of falls, had to escape while fully hanging, and even got through a route that I haven’t been able to do in the past. I’m diggin it.

Also looks like an arapiles trip is about locked in for late may/early june, and I am bloody psyched for it.

Hey JP I should be at Araps the weekend of 26-27 May. Let me know if you’re around then.

I was at Araps last weekend and getting some good progress. Found a perfect line - Blue Eyed and Blonde on Mysteries Wall - that allows a rap in from above to pre-place gear. I’m still lacking in stamina for doing harder routes with gear in hand. Being able to pre-place is good for having a go on harder moves. Got all the moves fine but fell once at the final crux move when I tried to link it. Next time for sure.

Also did The Second Coming on the back of the Pharos. Amazing line - crux is a scary mantle onto a sloping ledge above a roof off some thin face holds with no good feet. I got a bit scared and sat on a nut below the crux to have a think about what to do and get psyched. But it went fine when once I committed.

Been hitting the hangboard and gym rings a lot the last few weeks and it’s paying off.

Next weekend at arapiles is a lock. Cannot wait

Some solo top roping this morn at -3c was a bit of a shock… felt so bloody weak and my feet were slipping like crazy. I hope i can put both down to being cold (me and the rubber)

I’ve not been doing too much harder stuff recently, Mt Coree has a heap of stuff on it, and I like the style there, dragged myself up a 21 on TR that seems possible to lead this year maybe. Had a good go with some trad onsighting a weekend or two back which felt pretty grown up, even if the grades were low.

Cool. I should be there.

My climbing partner busted his ankle so he’s out, but I’m planning on spending the time working some routes on TR. JP if your crew need a climbing partner let me know. I’ll send a message closer to the time.

Also did The Second Coming on the back of the Pharos. Amazing line - crux is a scary mantle onto a sloping ledge above a roof off some thin face holds with no good feet. I got a bit scared and sat on a nut below the crux to have a think about what to do and get psyched. But it went fine when once I committed.

Nice work. Tis a challenging mantel. Would have been cold around the back of the Pharos - wind always seems to funnel through there!

Hey JP re Mt Coree, how long are the routes? Several pitches?

Coree is all (as far as i know) single pitch, and pretty much all sport (bolts/hangers to hang quickdraws on). There are several areas up there.

This site has it all mate, https://www.thecrag.com/climbing/australia/mount-coree

… i spend a lot of time with it open in one tab and realestate.com.au in another… what I’d love is to overlay climbing areas and property for sale… maybe Adam or Sean can rig up some arcGIS wizardry

Let me know if you’re keen to get out mate! I have all the gear we could need, incl harness and helmet, and possibly even shoes if you’re 40 or 46ish.

Hey JP, I’d loved too, thanks! Haven’t climbed in probably 20 years, so must be very rusted. But I still remember all the knots, rope maneuvers, abseiling etc etc.

As a matter of fact I still have my old shoes with me in CBR, which is good as I’m far from a 46! Will be in touch, thanks for the invite!

Arapiles trip was v awesome. Had a few leads on the first day but the placements were different to (more subtle than) the granite that I’ve been on, so it was doing my head in a bit. I mostly followed from then on, but absolutely loved it. I reckon I’ll try to tick most of these when I’m back and more confident.

So much thinking involved in the climbing there. No moments of forearm pump at all, so much 3D puzzling, good bits of exposure, very often interesting footwork.
No way to pick a favourite from tannin, morfydd, eurydice and watchtower crack, they’re so different. Brolga was probably the least awesome time, but still fine.

I’m quite psyched to go back sometime, but I dont think it will be anytime soon. The plan for the rest of the year (and maybe next year) is to get strong enough to have a crack at stangeness and charm at Bungonia.

Good work JP. All of those climbs are great. Bummed I couldn’t make it.

Strangeness and Charm at Bungonia is also amazing. It can get a bit wild in the gorge - run outs on small gear in a very committing atmosphere.