So we ran into a problem; the DT Swiss 350 Hub doesn’t fit the 11sp SRAM Cassette.

One thought was to get a Shimano 11sp Cassette instead.
Or also maybe changing the cassette body like THISbut I’m not really sure.

Totally missed this when planning the build. Very annoying.

Just use a shimano cassette. Will probably work better than a sram one anyway.

I was looking but couldn’t see a 11-36 11sp Shimano cassette. Do i need to get one that matches the SRAM exactly for shifting purposes or is a different range ok?

Geoff mentioned getting one of these too (in the other thread) which seems like a pretty straight forward thing to do.
I’m guessing a new cassette and this thing aren’t too much different in price. 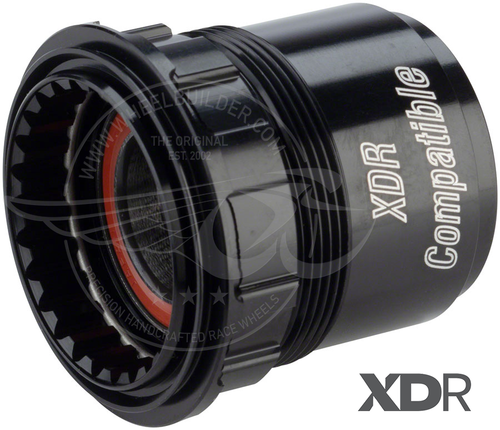 a shimano MTB 11 will fit the freehub you have, lower sprockets are dished over the spokes.

and the spacing is ok.

thanks all!
For whatever reason I’d rather adapt the freehub than get a new cassette.

we weren’t sure whether to go with the Shimano Road 11 freehub, or the SRAM XD Driver that Geoff mentioned in the Small Joys thread;
Seems like both might work though.

They’re set up for MTB, so while they might say 11sp Shimano on the compatibility that’s only mtb.
So you can get a replacement body;
LINK
that includes thru-bolt, QR, and also Shimano/Campy. The piece Geoff linked to was for the SRAM XD which uses the done cassettes only (pricey)
And the 11sp Shimano Road will work with 11sp SRAM Road like one would expect.

So I’m doing that.

Got there in the end! the internet is a wonderful place of knowledge if you know where to look.

Yeah, I thought my explanation above was clear that the xd driver is for sram mtb11 cassettes. the shimano/sram road11 freehub is def a better option for you. now you can choose between shimano or sram 11sp road cassettes (slightly different gearing options). And you can also use a shimano mtb 11 cassette with a spacer if you want that serving platter sized sprocket.

DT Swiss have recently started selling their Disc hubs with 11 speed road freehubs, however this is only recently.

Geez, just as I was getting my head around Shimano road vs MTB cassettes you go and confuse me again with SRAM bollocks.
Great. Thanks.

^^those freehub option aren’t particularly clear when choosing the hub, but make a lot more sense when they list them all together.
the DT Swiss tech person I emailed back and forth with was pretty useful. He mentioned that the 11sp road freehub is not something they usually ship with the disc hub, but that it’s happening more. I guess that explains them offering it direct rather than as a replacement bit.

Also mentioned that if you lace the wheel with a 10sp mtb freehub then change it over to a 11sp road then it will be out by .5mm. in case anyone thinks about it. so build the wheel after replacing the freehub (doh!)