OK some of you may have seen the frame that I planned to build up as a fixed gear (old Bennett frame). Along the way Rhino scored me some nice wheels but that is about as far as it got.

Today I headed into Bicycle Revolution up here in Brissbane and found myself a fork, stem, 43cm bar and a seatpost. I was just about to pay for this stuff when I spied this up on the wall and promptly bought: 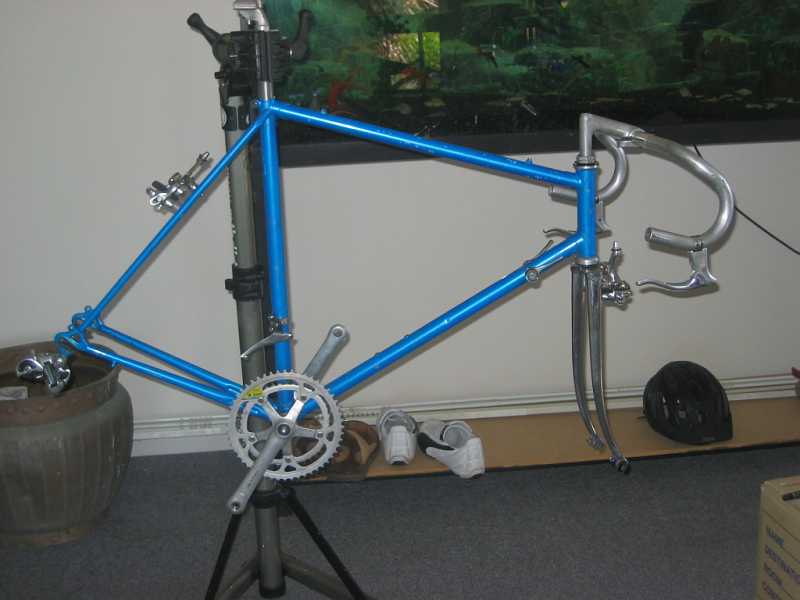 $180 as is which included seatpost, stem, 43cm bar and full Shitmano 105 groupset.
Frame is a 57cm Apollo EXO Cromo frame and the fork is unbranded (to my eye anyway) but is chrome plated.

I had originally purchased it thinking I could use the fork, stem, bar and seatpost toward my other bike and sell off all the nassty gears and brakes but now find that the steerer is too short.

Just want some feedback as to which of these options you would go with:
a) buy a steerer extender and use the fork on the brown frame.
b) sell off the brown frame and convert the blue frame to fixed (both have horizontal dropouts).
c) another suggestion

Hit me with your thoughts.
I am officially confused!!!

keep buying parts and build them both up. And use the biopace ring on the blue one!

keep buying parts and build them both up. And use the biopace ring on the blue one!

Actually I thought of that option after I posted it.

The obvious solution as previously voiced.

A man can never have too many bikes.

Well then the question then becomes how much effort do you put into the Apollo??
Do you bother removing brake bosses and cable guides etc??

Well then the question then becomes how much effort do you put into the Apollo??
Do you bother removing brake bosses and cable guides etc??

It depends how good you want it too be.

Its not a track frame. Its a road frame. Road frames have bosses and guides!

It could become your shitter - the rainy day bike. Not as much effort goes into it, but it’ll still be fun to build!!

Yeah I know what you are saying and this is the reason why I never converted a MTB to SS and instead just went and got the frame that suited the purpose.

Unfortunately at the moment track frames in my size and pricerange are just not available.

Unfortunately at the moment track frames in my size and pricerange are just not available.

All I’m suggesting, is don’t try and make it out what it is not.
It is a road frame. It does the job. Nothing wrong with that. It’ll do the job even if you leave the bosses and guides on.

Depending on whether you want to spend a heap of money/time on it, or get a bike up and running quickly and cheaply, take them off or leave them on respectively.

The paint job looks to be pretty good. So, but leaving them on, your saving yourself a couple of hundred.

It could become your shitter

you ARE talking about the brown one? :?

there is an empirical formula for happiness which is

where h is a state of contentment and n is the number of bicycles you currently have.
this is also called the “hunni i need some cash” effect.

Well after your responses I have pursued the recommendation.
A quick trip back to Bicycle Revolution and $26 later I walked away with 2 stems, a set of road bars, a 700c fork, a seatpost and some brake levers.

Plan is to leave the blue one as a freewheel SS (hence the need for brakes) and the brown one will be built up as fixed.

Unfortunately I do not have enough parts to build boith bikes yet though. I still need a wheelset for the SS and a crankset and saddle for the fixie.