Here it is, hot off the laser. Campy Record hubs choose nothing but the finest in CTA cogs: Couple of other photos here: 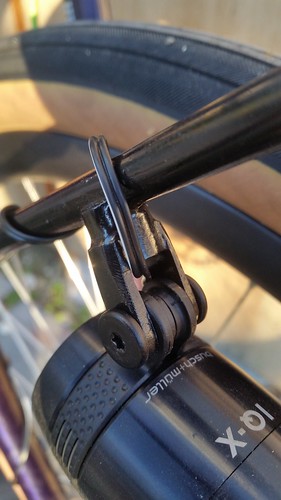 Hope you like it Nath, it’ll be in your hands soon.

Now that is COOL!!

And the other item that I soldered up on the weekend, a miniPOV from adafruit.com:

Awful rushed photo, message needs tweaking of font and frequency etc, but you get the idea. Now, any ideas on the first message Nath should rock on the mean streets of Melbourne?

Also, huge props must go out to the following people:
Master Engravers for pushing the job through quickly
Lynn of cta for donating the cog
Lats for doing the artwork
Everyone who so readily put in the cash to make it happen.

cheers for organising it everyone - it looks absolutely awesome.

Fashion designers don’t just parade their clothes on coathangers do they?

[plus, that’s a very small coffee cup in the first photo, wouldn’t want nath to think he’s going to be riding a cog the size of his hand!]

That cup is the correct size.

With the wheel thingy, does it have a velocity sensor so it doesnt look whack when you speed up / slow down…?

That cup is the correct size.

With the wheel thingy, does it have a velocity sensor so it doesnt look whack when you speed up / slow down…?

No, the one I’m building at the moment uses a Hall effect sensor so the image doesn’t move, this one will end up in different places with different speeds and message lengths.

The cog looks fantastic. Thanks to everyone for stepping forward to make sure that the cog was engraved.

That cog is rad.

What’s the miniPOV like build-wise? eg: will it withstand rain/mud/stairs? Did you just get the board or the whole spokePOV kit? Spill it all!

What’s the miniPOV like build-wise? eg: will it withstand rain/mud/stairs? Did you just get the board or the whole spokePOV kit? Spill it all!

A coat of clear paint would probably waterproof the circuit. I bodgied it onto a wheel with 2 zip ties for the photo, definitely needs some time spent attaching it carefully. If it was mounted securely inside the spokes a crash won’t touch it. Quite simple circuit, so not much to go wrong (unless my soldering isn’t up to scratch!)

SpokePOV requires a programming dongle, and is 30 leds on each side for mega images.

That looks the goods…

Nath -
I did the maths

There are a couple on Ebay at the moment.

I reckon you’d be the only street fixie out there with a 54 on the front!!!
wooooooooo hoooooooooooo

HAHAHA that would be awesome!

But I also did some maths and some minutes on the trainer in a very low gear - and figuring in my post-op rasmussen arm legs, i came up with 48:20. It still should look pretty

maybe you’ll get some sort of lance armstrong thing going on, and be bigger and tougher now-when your muscles grow back??? that’d be cool