Yeah, I’ve searched. I know some of you know the Grampians really well, so thought I’d ask for some advice. I wanna go camping up there with Lauren and 7+ week old Victor. We want to go for 2 nights and walk up a big old hill to a sweet view or something at least once. We don’t need no electric or hot showers; this is a test for a week on the beach in NZ in March.

Anyone got any tips? I’m looking at you K O, Rolly, Lewis, Aeons…

I’ve only done Mt Difficult, which is technically closed still from the fires. Nothing sketchy, amazing up the top, but did lose the trail markers on the way back down. Katers said her and Brendan did the same thing and got a lot lost.

I’ve heard really good things about the Major Mitchel Plateau, planning to do it soon.

Because Staplyton and Troopers Creek campsites are still closed your best option is Boreang in the central Grampians near Halls Gap. Boreang is a nice campsite for car camping - it has drop toilets and fire pits and good flat tent sites and is pleasant. It’s a short drive from there to Mt Rosea which is a nice 9km return walk with great views. A good one to carry the baby up.

I think (but it’d be worth checking) that the Staplyton area (Mt Stapleton, Hollow Mountain, Flat Rock) is for the most part open, but it’s just the campground which is still closed. In that case definitely drive over there and do the Hollow Mountain walk - the view of Taipan wall is one of the best mountain vistas in Australia in my view. I’ve seen it 100 times but it gets me every time. Or go to Flat Rock and do the Staplyton amphitheatre walk, which takes you under Taipan wall and is a bit longer. Also great.

Also, take a gravel bike. Some nice riding from the campground.

Also, when you look at Taipan wall, think “Serpentine”! Coolest climb on the planet (which I’m not (yet) strong enough to climb).

Can I just jack this thread and keep posting pictures of Taipan wall? I think I might: 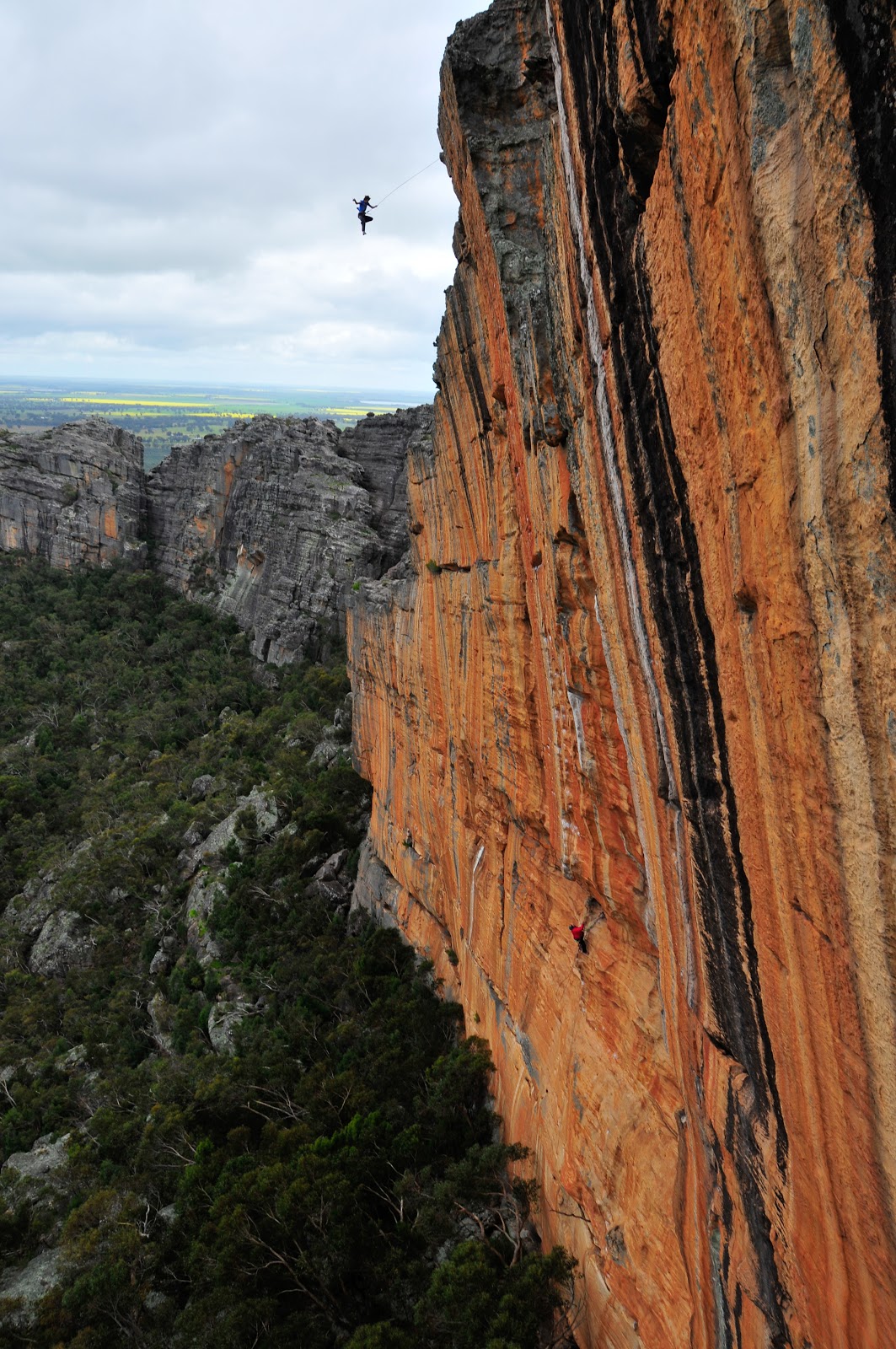 how bout when I come over for those mats I show you my Grampians map & we discuss over coffee?

Brendan’s guide to the Grampians.

The Grampians are pretty great. They are famous particularly for their diversity. The north end is real scrubby, sandy and dry, whereas the south end is lush and damp – some areas are classified as temperate rainforest. And in the middle there’s a bit that sometimes gets snow. That’s pretty cool.

My favourite loop is in the Wonderland area, which is a bit in the middle which is pretty spectacular, taking in Elephant Hide, The Pinnacle, Grand Canyon, Silent Street, the Balconies… all the stuff you see on postcards. It’s a 17k loop, but you can push it out to 21 if you’re feeling active. Leave the car in Hall’s Gap and walk along the bike path to Lake Bellfield. The walk across the Bellfield Dam Wall gives you pretty great views of the valley, if you’re keen. Then skip over to the main road. A bit opposite the car park is the trailhead, to Sundial Peak. Walk to Sundial Peak, then to the Sundial Carpark, then to the Pinnacle, then back to Hall’s Gap (via the Grand Canyon if you’re feeling energetic). That’s two awesome peaks in one go. In that neighbourhood, McKenzie’s Falls are fantastic, but very built-up – there are handrails and steps most of the way, and a kiosk at the top. You should still go if you have time. And Zumsteins is a nice picnic ground, where the kangaroos and kookaburras get a little familiar. Especially the kookaburras – thieving bastards.

The North end is fucking sweet – the cliffs are so dramatic, and the terrain is all stark and spectacular. Much of it is burnt out at the moment though. While we’ve successfully climbed the closed Brigg’s Bluff (without too much trouble), as Lew Lew said, we got very, very lost coming back down from Mt Difficult – I’d steer clear until it’s been reopened (even if the cliffs are spectacular… it’s worth driving down Roses Gap Road to see them, and also the million emus that seem to hang out there). Mt Zero is pretty great, and you get a real sense of it being the last little bit of the Great Dividing Range – everything you can see from there is flat. And as I think has also been mentioned, Hollow Mountain is also lots of fun.

I also reckon that Mt William is worth a go. There are walks to the car park, but even if you just drive up, then walk the last 2 or 3ks, it’s pretty spectacular – you can see for miles (if you walk around the mobile phone towers… thanks for them, Moccos. There are snow gums and weird flowers and I saw an echidna there once. It’s bitumen road the whole way, but it’s pretty steep – when I went down there on my fixie bike nobr akes, I couldn’t stop, and had to pitch into the ditch before hitting the gate.

Down south, Mt Abrupt and Mt Sturgeon are pretty cool, and you can reward yourself with dinner at the Royal Mail in Dunkeld. They’re pretty well marked walks, both with spectacular views. I tend to prefer the northern end though – it appeals to my dramatic sensibilities.

My favourite bits, however, are the Victoria Valley and the Victoria Range. Heading west of the Serra Range means you will most likely not see anyone else. It’s so isolated – no one ever seems to think of going into the Grampians from the west. You could start at Moora Moora reservoir – I went kayaking out there once and it felt like I was the only person in the world, with cliffs and mountains either side of me, and a variety of weird water birds all around. The 4WD track around there has all gone to sand now though – don’t try to ride it (sorry Katerz!). In the Victoria Range there’s the Cave of Hands and Cave of Fishes, both pretty impressive Indigenous Art sites (actually, I think these both are know by their indigenous names now, so you should probably check them first), as well as Mt Thackeray and the Chimney Pots. Chimney Pots is a pretty easy walk, and is well worth it – the rock shapes are really weird and cool, and the views are sweet.

You can also ride your bike to the mountains – you can put your bike on the train to Ararat, and ride from there. Depending on the time of year, there’s not heaps of traffic (and there are lots of ‘caution cyclist’ signs – some with bullet holes), but there’s a substantial hill just outside of Ararat, coming into Cathcart. It’s relatively flat after that. That way takes you through Moyston, where the locals are referred to as “Moisties”, and Pomonal, where user: Incomplete Streets grew up. I also think an ex-girlfriend of mine now runs the shop there. Say hi to her from me.

Other local knowledge: the pathway to Venus’ Baths is so clearly marked that you can find the way in the dark (when the moon is full, anyways); I reckon the best place for swimming is the far back of Lake Bellfield (drive out past the lake, until you’re quite a way past it, then look for a road that comes off the main road at an acute angle, before the Mt William Rd. Follow that until you’re in the water. If the water level is low, you can see the foundations of the houses that used to be there before they dammed it up. Actually, that road veers off into a path, which is a really fun 4wd track to ride around), but Kate reckons the best swimming is at the Stawell Leisure Complex. There are, in her defence, waterslides at the Leisure Complex, so she may have a point; Brambruk is really cool in terms of architecture, but unless there’s a special event on, it’s probably not worth going to – I saw a performance of King Lear there once though, with didges making the storm noises… it was so fkn cool; the Hall’s Gap Supermarket may still give you discounts if you tell them you’re a local – if they ask your phone number, make sure you only say three numbers, because all the numbers in Hall’s Gap start with 53564; you will never have to pay at the Hall’s Gap golf course, and it’s a good place to see Emus and Kangaroos; Hall’s Gap hall sometimes has movies, and it’s seriously like a village gathering, with tea and cake served beforehand… and probably a million other things. And a million more if you decide to go into Stawell.

But hey, why don’t you just swing by our place for a chat? After we got really lost last time I went out and bought the best damn maps of the Grampians there are, and you’re welcome to borrow them. You know where we live!

how bout when I come over for those mats I show you my Grampians map & we discuss over coffee?

I also have all of incomplete streets’ old grampians maps which you are welcome to borrow.

i went there a few weeks ago,
stayed at a nice little campground that was empty until the weekend named Kalymna, which was very good, though i have only seen Jimmy creek of the other options.
thumbs up for the golfcourse, covered in kangaroos and emu’s,no one else around, bring some beers.
Fish falls between zumsteins and mckenzie falls is the best place for swimming we found, visited it twice just to soak.

Is goose going to the Grampians?!

Is goose going to the Grampians?!

can’t see any other option

can’t see any other option

Yeah it’s a bit sad but what can you do

It’s alright, we put our kids down every night

i went there a few weeks ago,
stayed at a nice little campground that was empty until the weekend named Kalymna, which was very good, though i have only seen Jimmy creek of the other options.
thumbs up for the golfcourse, covered in kangaroos and emu’s,no one else around, bring some beers.
Fish falls between zumsteins and mckenzie falls is the best place for swimming we found, visited it twice just to soak.

I camped at Kalymna. was good.

There is a train to Stawell which will take you closer to the Grampians, it is the one that goes to Adelaide. The road to Halls Gap from there is flatter and shorter than from Ararat. If you do ride from Ararat there is a road called Better Route which is a nice scenic gravel road detour which goes around one big hill. It starts near Cathcart.

For mountain biking there is single track for cross country and downhill around Ararat in One Tree Hill reserve.