When I sold my Nature Boy a number of years ago, it was mainly because it didn’t have gears or disc brakes. Since then I’ve had a couple of bikes to fill the void, with the latest being my CAAD8 set up as a 1*10 flat bar commuter.
While it was fun, it was very limiting in where I could take it, and road calipers REALLY suck in the rain.
I put my CAAD8 up for swap for a similar sized disc cross bike and a guy sent me a link to the Crosslight.
I ordered it and it sat in the spare room for a little while, as I gathered up a few parts.
Initially I had plans to move as many parts off the CAAD8, but winter on the Gardiners Creek trail is terribly sandy, so it was just easier to replace most of the drive train.
I did keep my stem/bars, saddle/seat post, 105 CX cranks and Saint shifter, so it still has a similar vibe.

Mock up in the spare room. 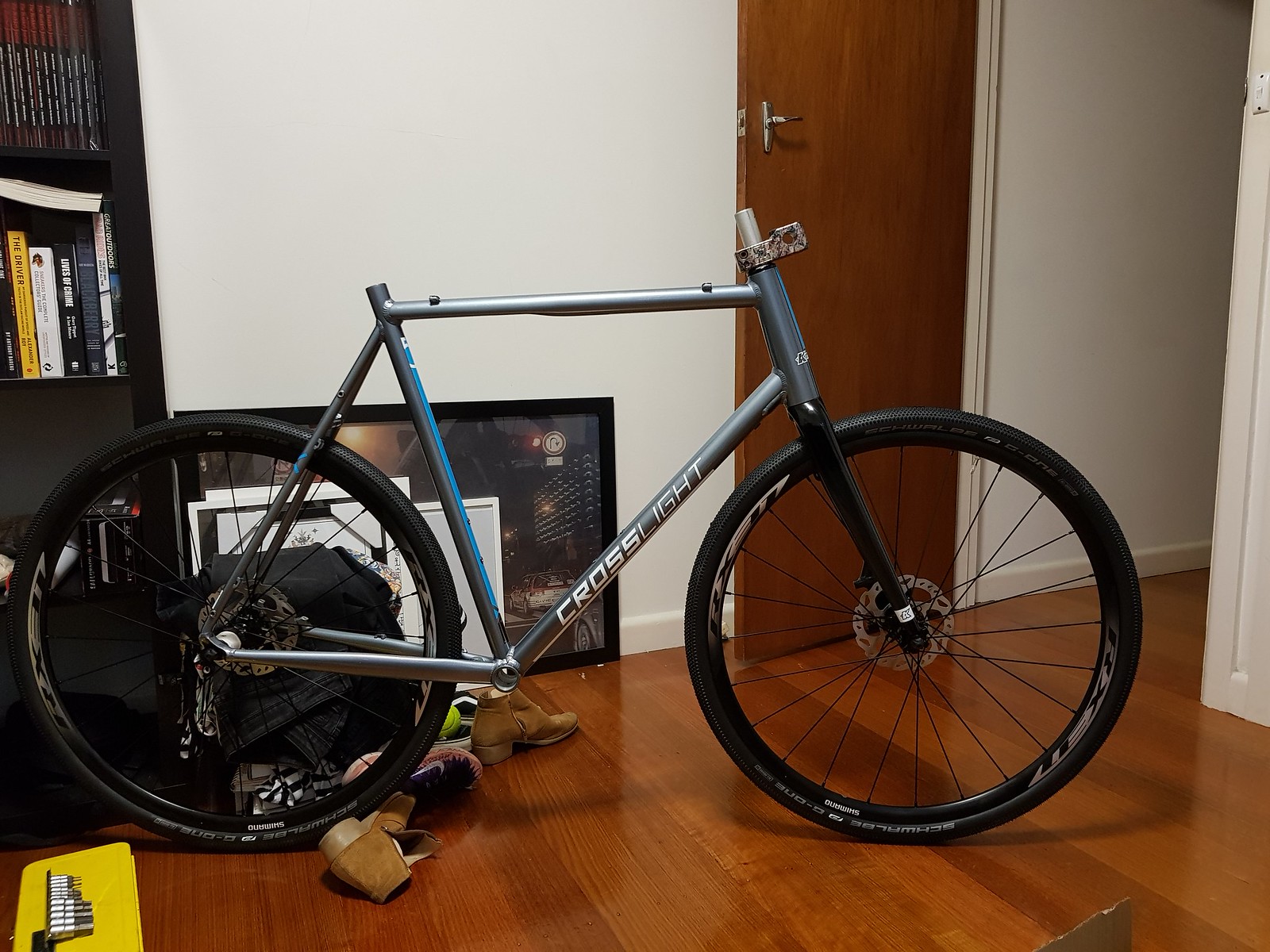 My last two bikes have run Zee derailleurs, but I bought an XT this time around. 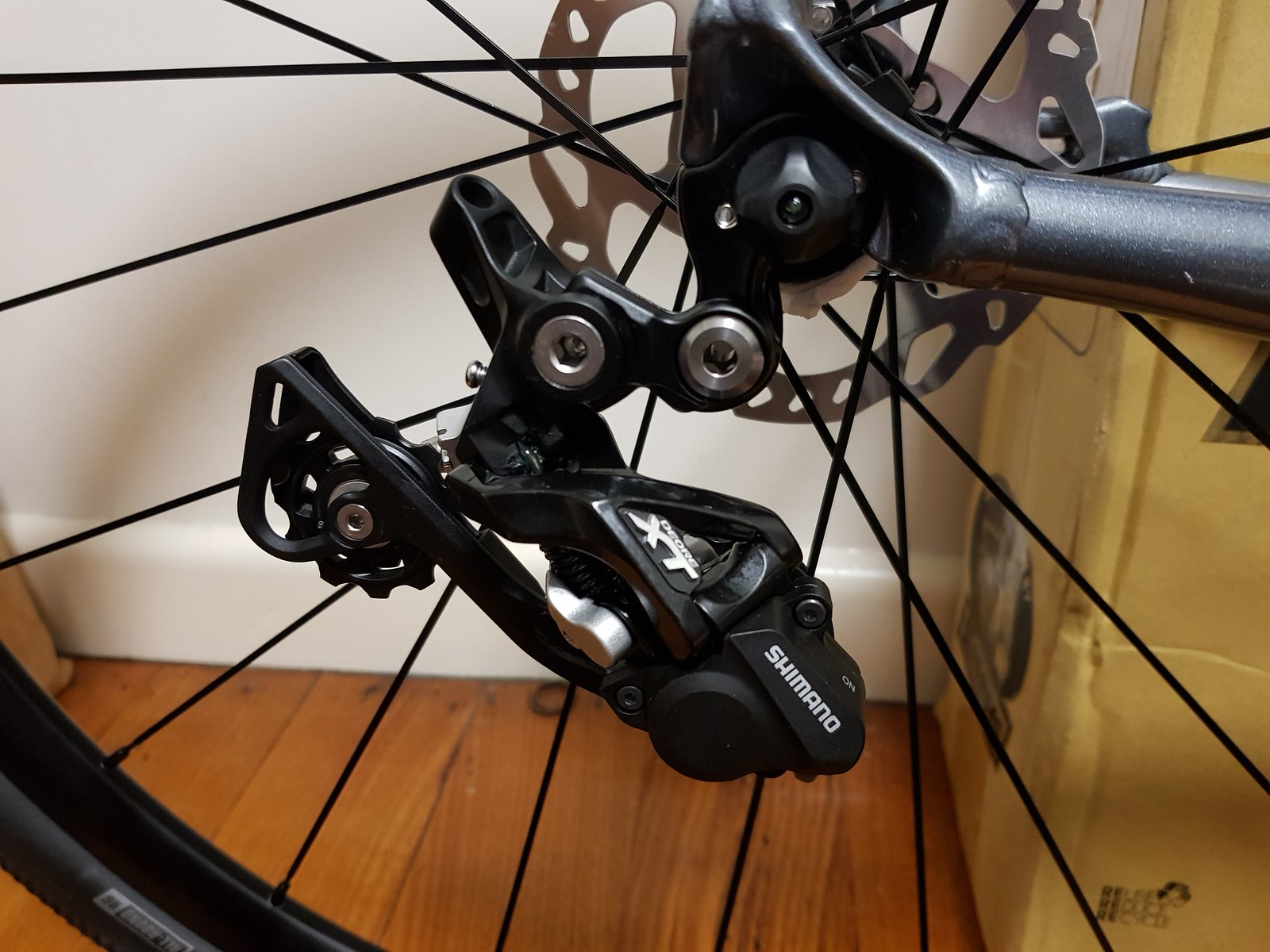 The internet tells me this bike fits 41mm tyres with guards, but I erred on the side of caution and went with 38mm G-Ones. Initial ride to work this morning was promising, quite fast. 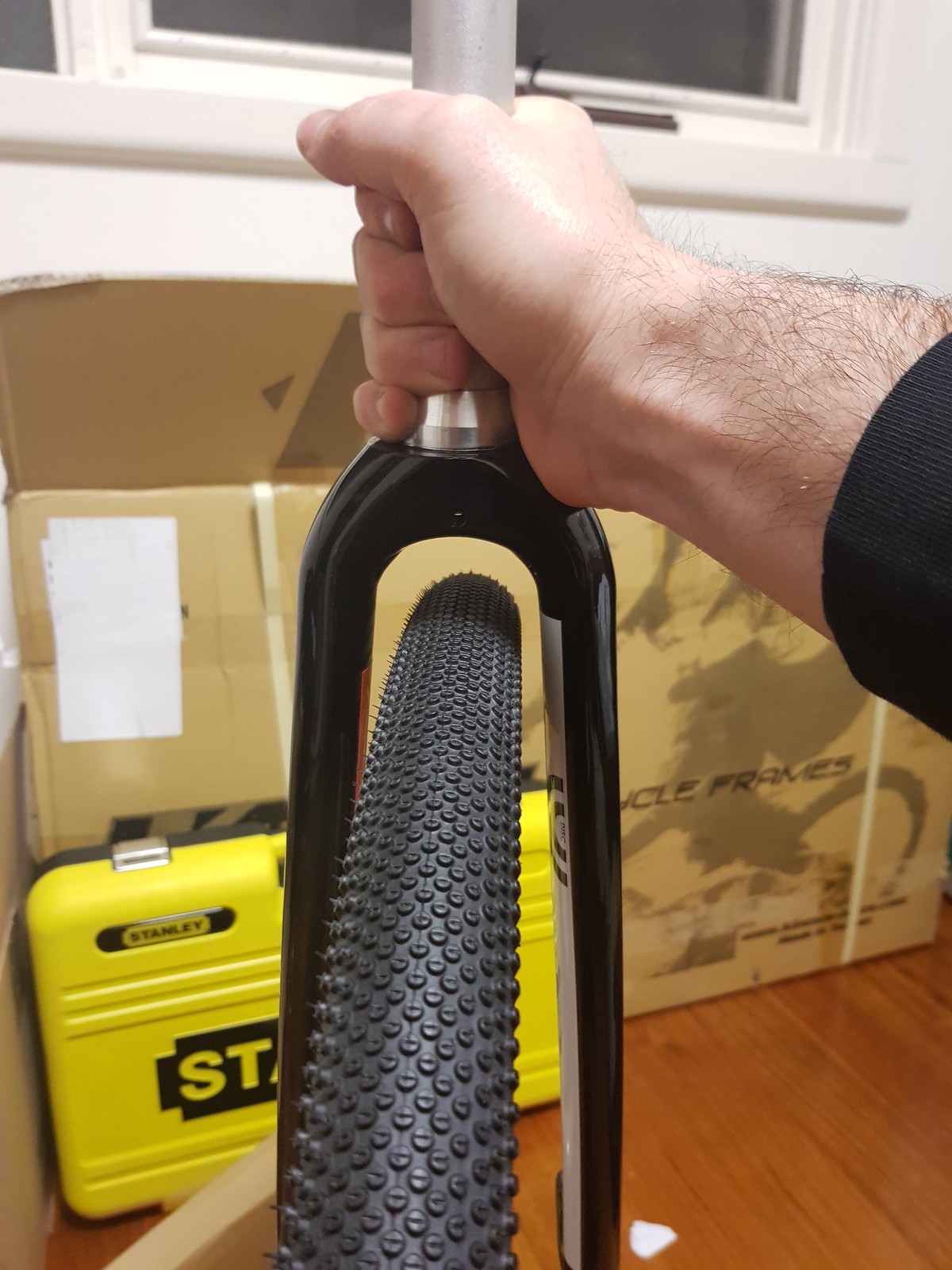 I originally thought I could run 160mm rotors front and back, though a test fit confirmed I couldn’t. 140mm rotors are tiny. Running XT calipers front and rear. 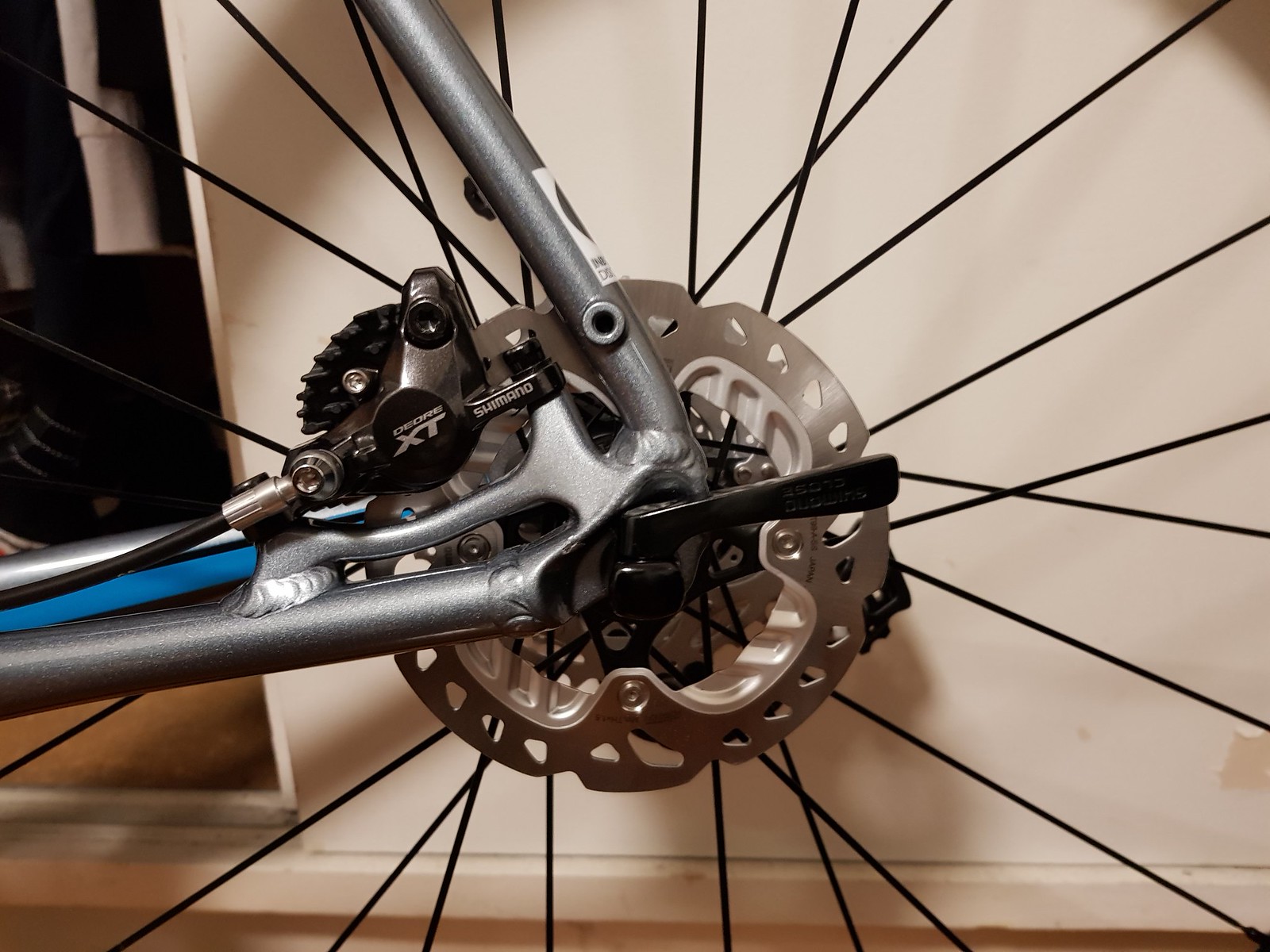 And all built up. 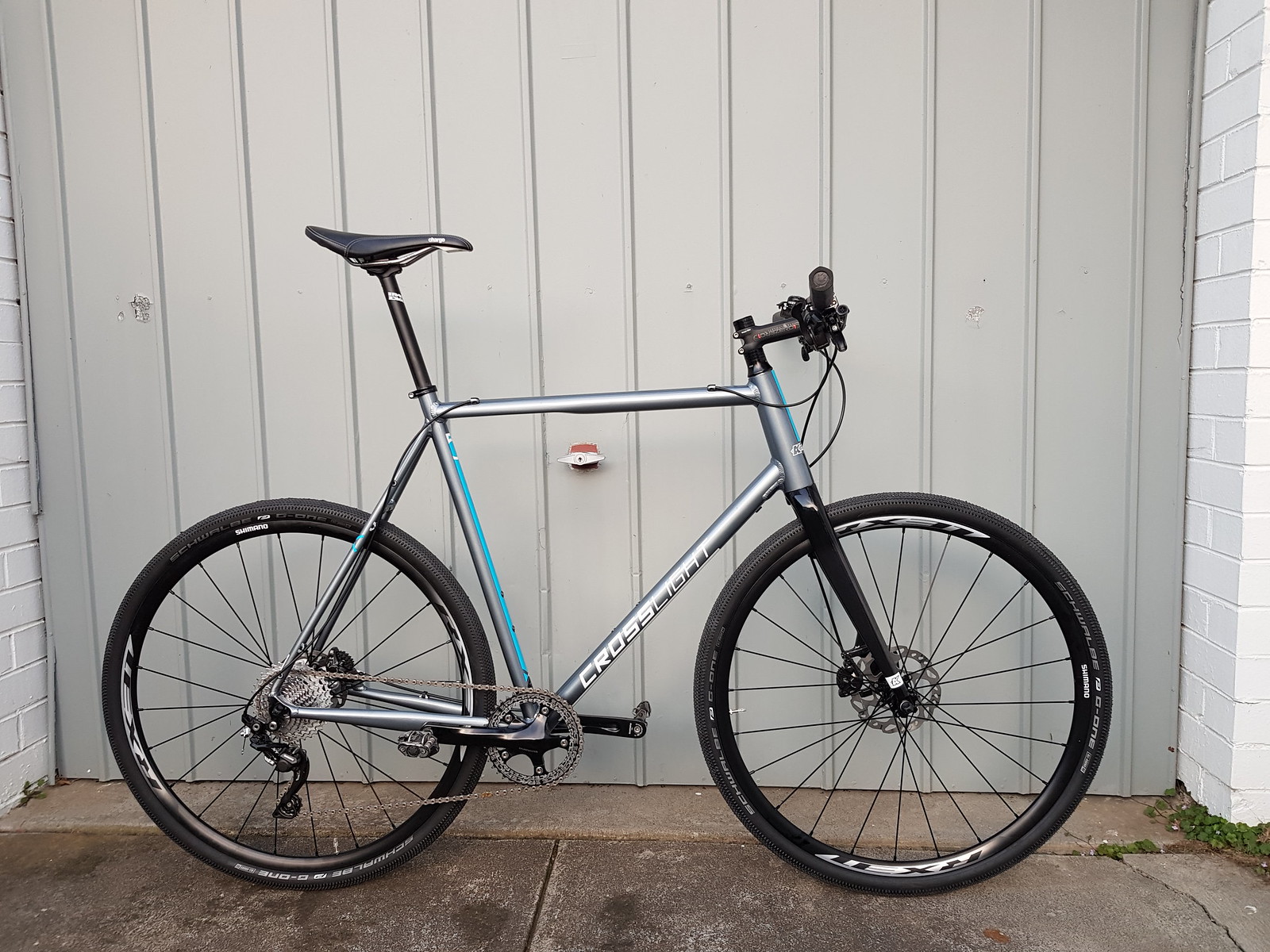 Plans are obviously to commute on it, ride some trails and maybe even a TWBD or two.
Will add some bottle cages and a front rack could be an option. I’m envious of people commuting without a back pack.
Fenders will wait until after summer, I’ll probably get wet a few more times this winter though.

Those G-One tyres are great. I have the 40mm versions.

Digging the flat bar look on a cx/gravel rig. What width bars?

Those G-One tyres are great. I have the 40mm versions.

I rode about 50km on them yesterday and was suitably impressed.
Will start playing with pressures and see what works, obviously not going too low as I’ve still got tubes at this stage.

It was more a comment on the physical size than the function of them.
If they are fine for bike packing, they’ll be fine for my commute

Digging the flat bar look on a cx/gravel rig. What width bars?

It is a pretty standard combo for my bikes.
These are 720mm wide, I don’t think any wider would work in traffic and at times these are too wide for that.

After yesterday’s maiden voyage, I’m quite happy with this bike.
After riding 25/28mm tyres on the CAAD (and 23mm on the CAPO!), you forget how nice it is to ride a bigger tyre and being able to sneak up and down/around things.

I’m not sure if SOTB will come this year, once a front rack is on this I think that’ll have me sorted for summer!

I’m not sure if SOTB will come this year, once a front rack is on this I think that’ll have me sorted for summer!

This year is Summer Of Rack Bike anyway, so you’ll be totes #ontrend.

Bike looks sw8 by the way.

I just want to see this poppin’ wheelies.

Guys! You are forgetting that rear rotor size is very important for moccos as it has to do ALL the braking for him as he never has his front wheel touching the ground. This year is Summer Of Rack Bike anyway, so you’ll be totes #ontrend.

One of a couple of my usual parks!

Picked up a Soma rack from MikeD this afternoon and got it on the bike.
I think I’ll make up something slightly different for the axle mounts, but overall it looks and rides pretty good.
I was surprised that I could still ride no hands and not steer straight into a tree. Figure that will change when I put a load on the rack.
Looking at buying a drysack or similar to take my work stuff in each day, will wander past Aussie Disposals and see what they have. 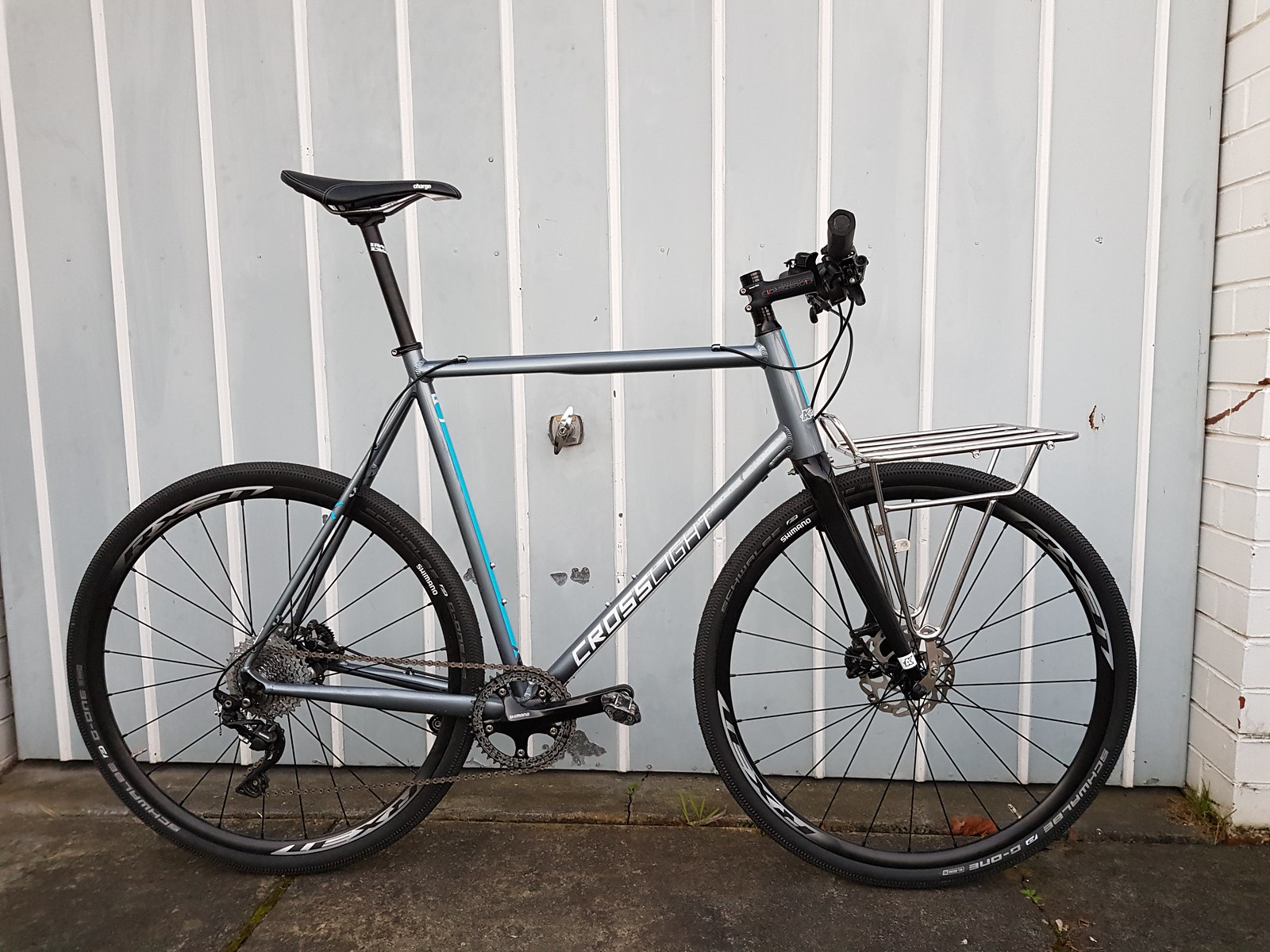 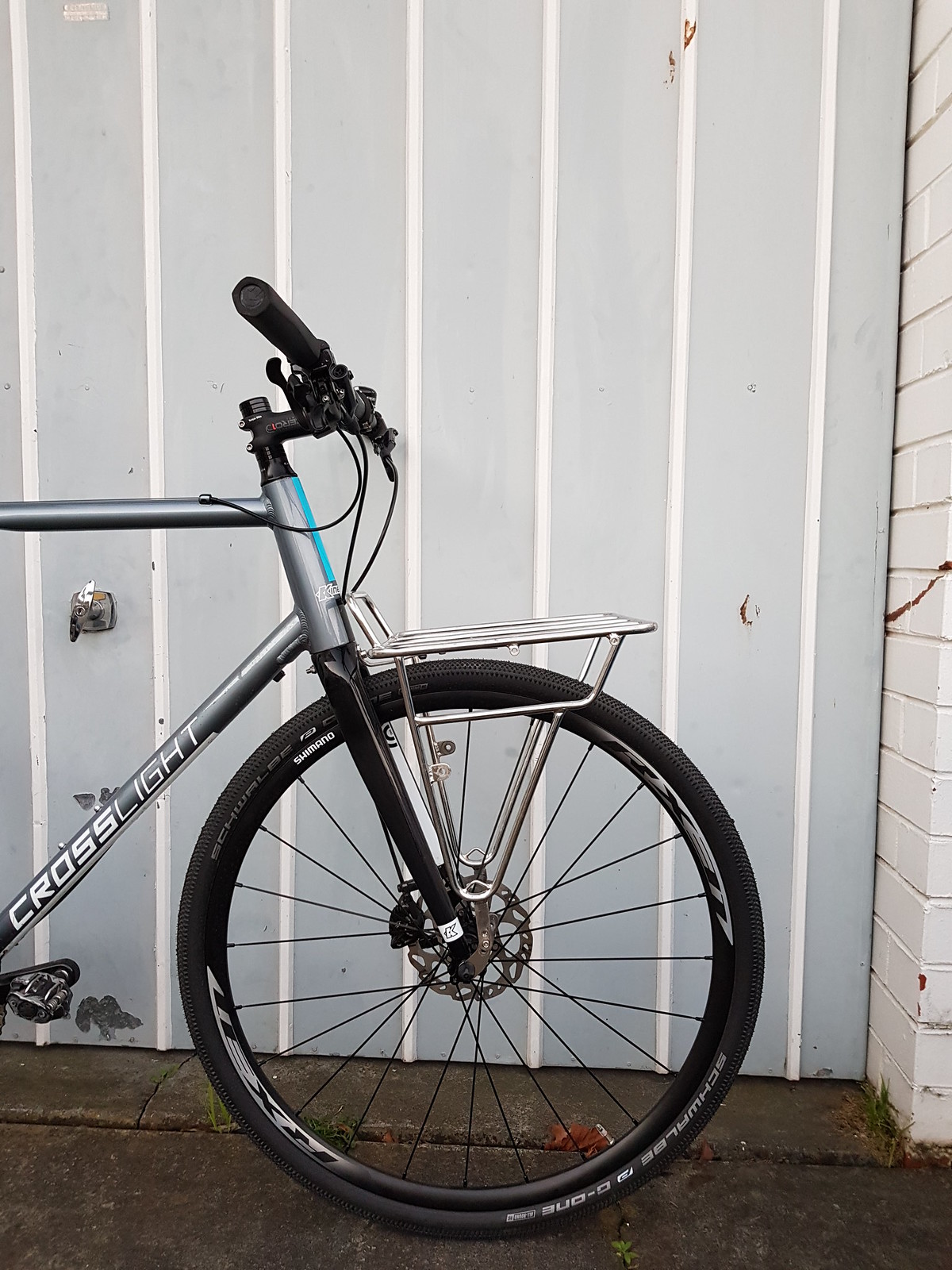 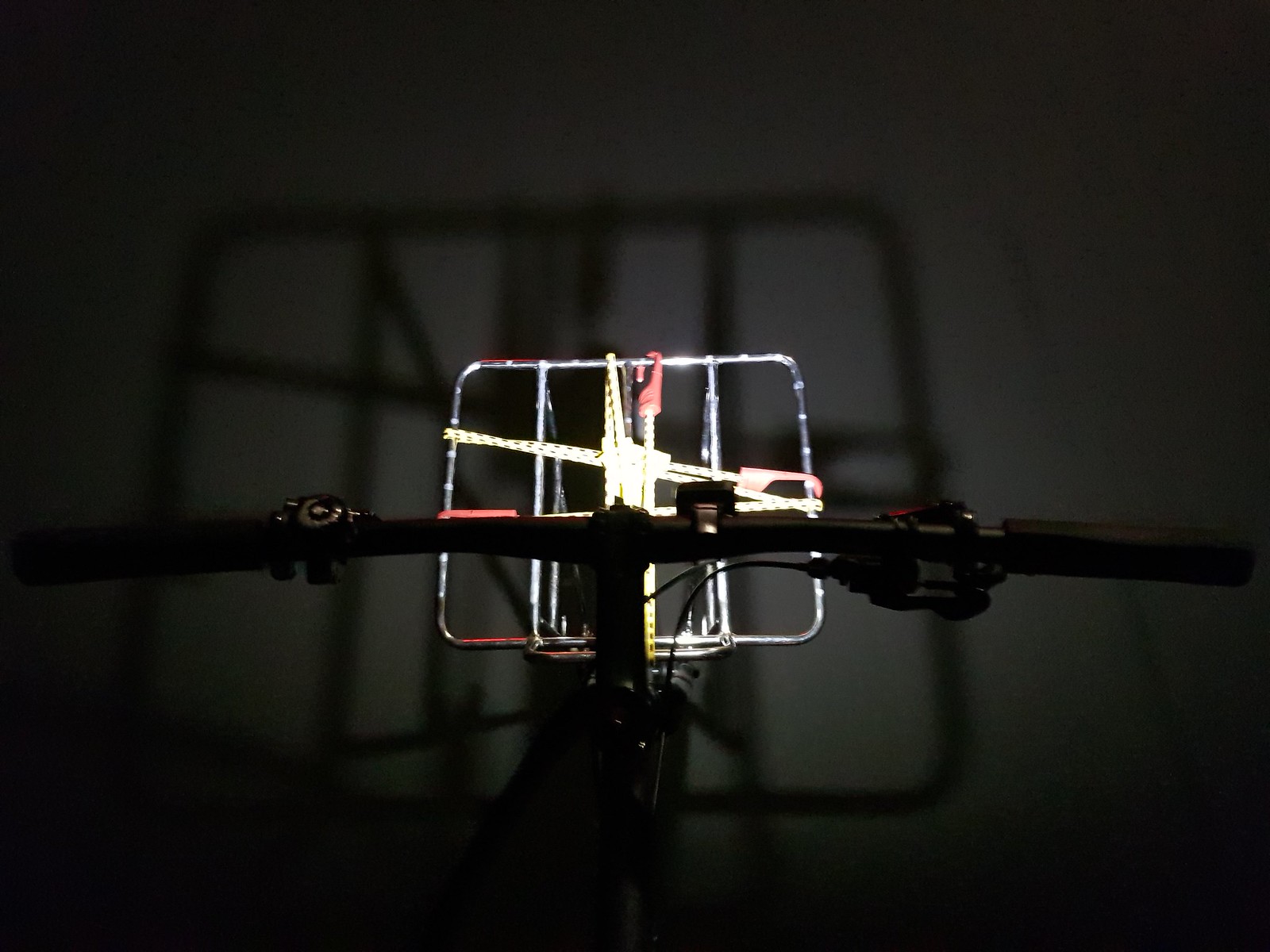 Hope I cross paths with you at some stage on the gardiner’s creek trail. I hop off at Burke Rd.

And add one of the multitude of basket bags available these days.

Also, you might want two bolts connecting the dropout tang to the main rack body to stop them pivoting forward.

Hope I cross paths with you at some stage on the gardiner’s creek trail. I hope off at Burke Rd.

I’m off at Toorak, so the chances of us bumping into each other are reasonably high.
There are a few people on that trail that look like FOAers, but I’ve never recognised any of them.

Also, you might want two bolts connecting the dropout tang to the main rack body to stop them pivoting forward.

Yeah, that is my main concern, as all the angles don’t quite line up to allow 2 bolts currently.
I’ll make up some other pieces so it all fits together a bit nicer.
At this stage with a bit of pressure/weight on the rack and current angles, it doesn’t seem to want to slip forward, so will just keep an eye on it until I get a chance to get in the garage and whip something up.

I use a old Chrome messenger bag with the closure straps (or whatever they’re called) around the rack and an elasticised strap to keep it from bouncing too much. I’ve had the bag for years and works perfectly.