I thought I would post an update of my road bike. I posted this bike previously in the Post a pic of you and your latest purchase thread, and possibly elsewhere.

I bought it off a guy in Port Melbourne who was selling it very cheaply on eBay back when eBay was good like that and I’d cruise it when I had time during nightshifts.

Those of you who know me will know my cycling history. I’ve ridden bikes since I was 5 or so, but never been a racer. I hate putting myself in that zone that you need to put yourself in to win stuff. I’ve always commuted by bike, but it wasn’t until I picked up a bike or two at the tip shop in Darwin that I got sucked right into it. I was attracted to the fixie aesthetic that I’d seen on the internet at the time (2009) but that wasn’t physically accessible in my community. I got into touring really, and later; gravel grinders and Audax and that sort of stuff.

I never “got” road bikes. Why would you want to ride a bike with such skinny tyres? Such a saddle to bar drop? Surely weight isn’t everything right? But this Look came up and it was a bit exotic and clearly a bargain, so I got it. I rode it a few times but still didn’t really understand it, but I couldn’t bring myself to sell it.

I moved to Launceston in 2019 and rode a bit. Fair bit of mountain biking and some gravel grinding. Then I fell out of love with bikes for a bit. I wasn’t too worried. It’s happened before and I’ve always come back. Anyway, I got a bit fed up with the amount of focus required for mountain biking. I just wanted to zen out. My new guitar teacher rides 40km+ loops 6 days a week so I checked out where he went and figured I should give some a go. My rando bike was disassembled though so I put on some proper lycra, put my leg over the Look, and rode out to the Fish Shop (pretty quintessential simple roll along the river).

Such sensations. It felt great. I saw a glimmer of what this bike is sort of about so I rode it some more, on more challenging routes, and it was awesome. I ride it often now, mixing it in with the rando bike.

Anyway here it is. It’s good to be back into riding for fun. I wish I had more time to do it but I’m committing time to it when I can and feeling good for it. 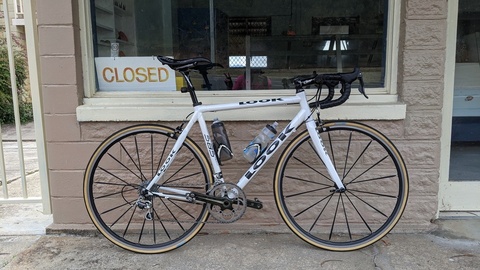 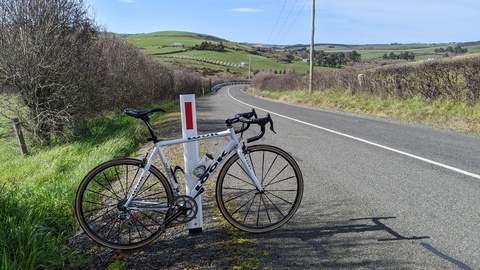 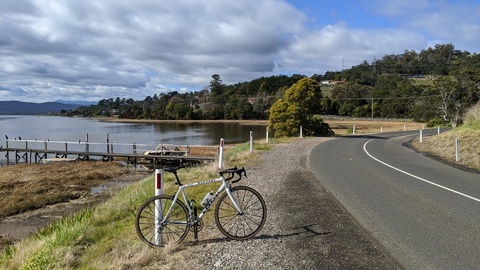 It is a very nice bike.

How many hangers has it gone thru?

Pete doesnt go for hangers, he tends to keep both wheels on the ground in my (admittedly limited) experience.

Damn that’s a nice bike Pete. Stoked to hear how much you’re enjoying it!

@MikeD and I actually went for a ride soon after I got it didn’t we. A poorly scoped route somewhere around the back of Mt Macedon (I’m much more experienced at route selection now, but @MikeD and Gareth Evans are the supreme gurus). You were on that lovely Bauer that Tate now has. Neither of us rode bikes like that much again, until now, for me.

These are the things people will look back on in 20 years and say “I want to recreate this retro build”. Classy.

This is heaps better than that CAAD 10 thread.

you cant have one without the other

Is that just because Pete rides in the big dog

Only for the pics!

took me six months of riding to attain the strength to ride in the 53 hahaha fml.