legalising motorbikes to travel in bike lanes at a maximum speed of 30 kilometres. i hate the idea.

twas on the abc radio, but i can’t find anything on the net about it. apparently bicycle victoria and the RACV, as well as (obviously) the motorcycle users group in victoria all support the idea. the only benefit i can see is the added amusement when some motorist opens their car door in the path of a 300kg+ cruising motorbike.

Only stupid people are breading these days. :roll:

Motorcycles in bike lanes are fucked. Either put in another car lane or get rid of the bike lane.

Motorcyclists in the bike lane need to be glassed. Especially the fuckheads on those 50cc Vespa shitheaps that zoom up behind you and try to ‘undertake’.

Then you rip them off at the lights.

heh, tristan, that was a little joke wasn’t it …

‘only stupid people are breading these days’

Hey spuddy was it a fucktard wearing a yellow jacket on a gilera? If so it was the same ass that did that to me on two separate incidents on different days.

Oh incidentally now I am looking for him he has dissapeared into fat air.

Grrrr bike lanes are for bikes! Urge to kill rising…

it was the same ass that did that to me on two separate incidents on different days.

I always get the same two ‘dudes’ going to work, down the bottom end of Church St.

I ride my motorbike in bike lanes to get to the front at the lights occasionally, but only if there’s no bikes and it’s a short distance.

i believe it’s legal for any distance under 50 metres same as using them to turn?

btw, this debate is still going on, the scooter users associations are campaigning to be able to use the lanes.
idiots .
it would help if they were all good riders, but if the lanes along st kilda rd etc, are all filled with wobbly scooter riders (and dicks on harleys who have no depth perception) i’m going to filter traffic and split lanes on my pushbike with the motorbikes.

This is the most fucked up idea they’ve come up with. It’s always the inner city, beginner, Vespa riding fucktards that do it. They either cut you off or belt past at 60k as you’re starting off at the lights. I was polite at first cos I thought it would ‘educate’ them, but now I just abuse them. Fuck em, they know they shouldn’t be there. :evil:

They just don’t have any idea of how to ride on 2 wheels. Powered or pedaled.
They think their little yellow L plate means please give me more space than I need cause I am trying so hard to do my bit for the environment.
Little do they know their pissy little shitbox engines are so inefficient they produce more pollution per cc than a fucking V8 Commodore. Even the Chinese got them crushed cause they were so filthy.
Next thing they will want is there own scooter parking bays at the expense of bike parking.
Drown them all in a vat of their own bile.

Scooters etc… are legally allowed to ride in bicycle lanes, on bicycle paths in Denmark. Its nice for them, but sucks for everyone else, because people start to think its safe because they are off the road so shit loads get them… and they all get old and incredibly noisey…
it was the noise that annoyed me more than anything… too nooooiisssyy

why are BV behind this?
oh yeah, I forgot they don’t actually do anything for cyclists…

i can’t actually remeber anything about what they were talking about on the radio that i wrote about in the first post, but apparently the scooter riders were protesting in the city a coule of weekends ago, according to what i read about on a motorcycle forum. and it just got me pretty angry again.

but i imagine BV feels it would give them more collective power, to represent scooter riders as well. plus they’re probably getting gobbies out the back from all the vespa girls.

and hank, i actually forgot about that, but you’re right. same in the netherlands. i believe there is a capacity limit, as well as a speed limit. the difference from what i recall was that the paths were off the road so the riding was more predictable. less dashing in and out of lanes to get the best position on the roa, which is what i imagine would happen.

This was also in the same article as the Bike Blitz report in the Leader.

50m is the maximum distance for bikes/scooters to travel in the bike lane, and yes, as apart of the bike blitz, the cops have been booking offenders. Good. Collins St is nasty, and it’s usually me giving them the usual serve of “If you want to ride in the bike lane, then get a bike”.

Here’s an article from the Moreland Leader

What a load of shite.

I’m all for it if they all attach roller bars to the back so I can motorpace all the way to work.

Rollerball (1975) had the right idea on how to deal with them when they get in the way! :evil: 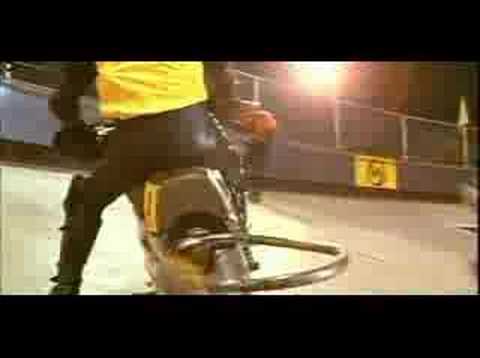 my girlfriends dad rides vespas and we had a bit of a heated discussion about this a couple months ago.
i love motorcycles (mainly jap crap), but i fucking hate vespas and the people that ride them in the cities.

Any skilled motorcyclist knows that the safest place to ride is as far in the middle of the road as possible to increase your visibility and ability to be seen; increase your PRESENCE on the road. So for this reason I can not see any decently skilled motorcyclists actually using the bike lane for anything more than splitting traffic and turning left. The thing that bothers me is that it may increase the likelihood the inexperienced motorcyclists and scooterists to sit on the left side of the lane/bike lane, making them an even greater liability.