I called up my friend last night (fellow cyclist) and suggested we take a saw to a set of handlebars I have. He sounded interested in the idea but stipulated that we must comply with the guidelines set out in the Bike Snob Book. (Bike Snob: Systematically & Mercilessly Realigning the World of Cycling: BikeSnobNYC, Koelle, Christopher: 9780811869980: Amazon.com: Books)

I was then on the receiving end of a quote from the Holy Book that sounded something like this, “The trendy hipsters of the fixerati are incredibly vein. After purchasing the unnecessary messenger bag they will endeavour to saw their handlebars down to the size of a hotdog. Bike couriers reduce the size of the handlebars to the width of their hips so as to more easily move through traffic. The handlebar width is imperative as a fulcrum to manoeuvre the bicycle effectively – this was discovered by Socrates who stated give me a large enough fulcrum and I will move the earth. Socrates does not encourage handlebars the size of toothpicks that barely fit 2 hands but the fixerati are under the impression ‘the smaller the handlebars, the cooler you must be’.”

I agree wholeheartedly with the submission from the Holy Book and often refer to it’s website (Bike Snob NYC) for the unwritten rules of cycling (laugh your arse off funny).

So I thought I would create a thread where people could post their unwritten rules of cycling and dob in people who have breached them (name and shame). 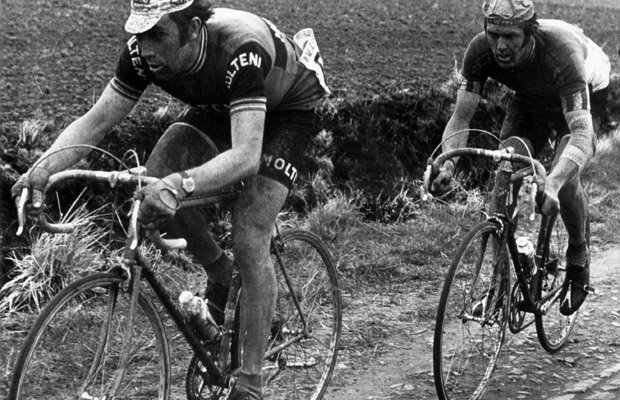 Velominati – Keepers of the Cog

also, in the words of Sime “SPD sandals and explorer socks, definitely not pro”

^ We also added a whole bunch of fixed gear specific rules (call it an ‘annexe’) with our usual droll wit here.

Don’t be a fuckhead.
Thats about the only rule you need to stick to.

-Don’t run every red light then proceed to ride really really slowly.
-When I stop and tell you that you’ve nearly just killed me by cutting me off to get a parking space do not, under any circumstances, say ‘sorry I didn’t see you’. I’m six fucking feet high on a brightly coloured bicycle legs spinning wildly bright red bag with reflective stripes on my back and a clunky stupid looking helmet on my head. WHAT FUCKING PART ARE YOU HAVING TROUBLE SEEING!
(Yes the above counts as a ‘rule of cycling’ as far as I am concerned driving is a lazy and stupid version of cycling)
-Don’t ride everywhere all the time in your granny gear.
-Don’t wobble the handle bars when you get on and push out that first pedal. Seriously do you have fucking cerebral palsy? You can’t all be riding a bike for the first time
-If you use a helmet learn how to put it on properly. Starting with which end is the front and ending with doing up the strap.

watch out for fat children crossing the road…

pls see the pin’s link, and add to that thread.