To solidify my BOGAN status

or southern cross, or ‘fuck off, we’re full’

Slightly OT but it could work for you.
i’ve always wanted a T-shirt with big letters

“You look fat in those pants”

The necks are pretty red where I come from, so here are some more options-

“If you don’t like it, leave”
“My other car is a boat”
“Good cowgirls keep their calves together”
“Adventure before dementure”
“Fat chicks - shoot 'em, don’t root 'em”
“Conargo Pub”
“Where the fuck is Conargo?”

As for who could make your stickers, most printing shops will do them to spec, just look for business card printers and you’ll be good. I think it’ll cost you around $30.

just get this really big across the tailgate:

I shoot fish and I vote

i want to punch people that have those on their cars

I think you should get a huge fixed.org.au sticker in your back window

that is pretty much my day today life 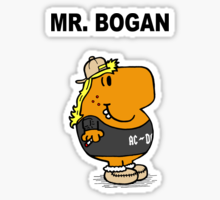 How about, ‘My other car is a tallbike.’

You need more than stickers…