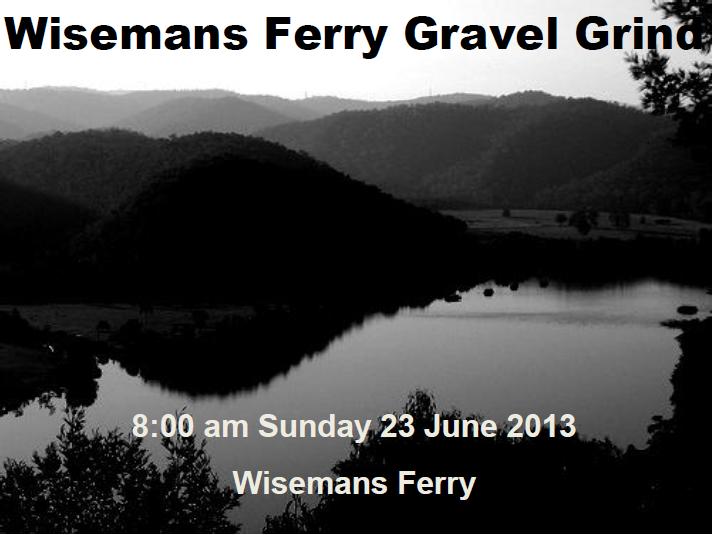 What’s this all about?

This will be an unsupported ride. You will be responsible for carrying all food, water clothing and spares needed to get you through the 80ks. And you will be responsible for finding your way along the route and getting yourself safely back to Wisemans Ferry. It is a relatively isolated area, you will need to tell someone your plans so that they know where to send the search party.

Now that’s all out of the way, this should be a fun friendly day for like minded riders with a little sense of adventure. It is not a race. There are no plans to leave anyone behind. As a rule of thumb, if you would not attempt a ride like this by yourself, then maybe it is not for you. If you are a little unsure, I suggest bringing a friend (or more!) or buddying up so that there is someone specifically watching out for you.

I will publish the route closer to the ride, but so far it looks like being 40ks of undulating ridge-line riding and 40ks following the rivers. There will be a bailout point that will cut the distance of the ride by roughly half. I’m yet to do a reccy, but it ought to be a ripper.

I’m booked in. Family approved day to ride. I will either be on the 29er, Jonnos C’dale - or at least go the 4wd route with Ev.

In. 35c Kojaks going on the Primate.

Will sort out what I’m going to ride and my work schedule so that I can attend.

I DON’T KNOW WHAT TO RIDE BUT I WANT TO GO! Hmmmmm…

I DON’T KNOW WHAT TO RIDE BUT I WANT TO GO! Hmmmmm…

I don’t know what I’m doing with work, as we finish trading on the 16th, and I’m not sure what my roster will be after that day.

I don’t know what I’m doing with work, as we finish trading on the 16th, and I’m not sure what my roster will be after that day.

You transferring to one of the other thousand stores in the vicinity?

I’m all new to this off-road sort of stuff. Pretty interested after hitting some single track on my sweet crab0nZ fiqqzy a few weeks back - which was very sketchy.

Judging by the above posts - putting the largest tyres I can on my roadie probably won’t suit? (23’s lol it has sw8 clearances)

Or would I be better off finding something with wider tyres? I think my dad has a 26" hybrid bucket of shit that I could fix up/commandeer…

(sorry for the noob questions)

We’ll see what the requirements are once Carlin has scoped it out. Pretty hard to tell from gmaps just how rough an unsealed section is gonna be. Chances are 25s will be the smallest you’ll want, imho.

We’ll see what the requirements are once Carlin has scoped it out.

This is it. But don’t stress too much. The bike you have got is probably good enough.

Also, a lot of the street view photos are from 2010, and I know that some unsealed roads in the state have been sealed since then. I will know a lot more in a couple of weeks.

Fingers crossed it checks out alright. I’m keen as mustard.

You transferring to one of the other thousand stores in the vicinity?

Yeah, Norwest is closing down.

The route has been checked, and it is good. Really good. Satisfaction guaranteed.

As for the burning 23mm tyre question, it will be possible, but not easy. There are potholes, corrugations, loose gravel, hardpacked gravel, little rocks and tarmac. some of it is pretty loose and there will be some sketchy steep descents on any tyres without knobs. But run what you have got, it will be worth it for the good parts of this ride. Remember if it really is too much there is a bail out option and tarmac return to Wiseman’s after 20ks.

Distance checks out at 91km, with about 1000meters of climbing overall.

More to come. I’m really happy about this. It exceeded my expectations.

In lieu of Roobaix I will do my best to attend. Inbred with 1.75" Marathons WEOW

Are riding any of the great north rd, or jacks track?

Would be keen. Though the SS bike is all I have, and I’m assuming anything around Wiseman’s would be fairly hilly?

The Wisemans Ferry Gravel Grind will consist of 90 kilometres of tarmac, dirt, gravel, corrugations, small rocks, loose stones, and potholes. Heading west from Wisemans Ferry by the Webbs Creek crossing, the ride rises briefly over a ridge before dropping back down to the Hawkesbury and winding its way along the shoreline. Then it heads into the hills with a long undulating run along Wheelbarrow Ridge road reaching a high point at Colo Heights. After a steep drop to the Colo River, the home run begins, following the southern banks of the Colo and Hawkesbury, crossing at the Portland Ferry. There is one decent little climb, and many undulations, but other than that the last 22 kilometres are mostly sealed. You’ll be ready for a feed by the time you get back to Wiseman’s Ferry.

It does get loose, and there are some loose steep descents, but there is nothing big and rocky. The whole ride is on open roads, no fire roads, and nothing ‘off road’. What you ride is up to you.
At 16 kilometres, there is a bail-out where you can return on the almost gravel-free River Road. By now you will have had a taste of the loose stuff and a steep descent.

This ride looks good on paper, it’s even better when you ride it. The steepest parts head down hill, the big elevations are almost all out of the way in the first half, and most of the ride is in the valleys following rivers. Beautiful.