I saw James and cuddled big floofs and met the youngest Kent and fondled French crabon too! I missed Jono though which would’ve been great. 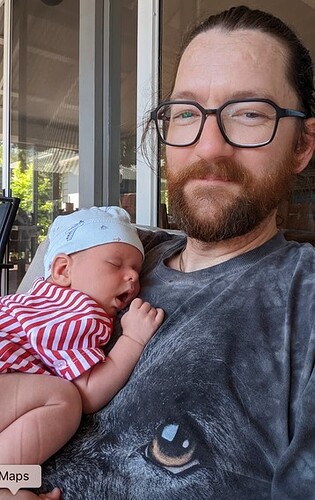 NSJ: people selling something to someone else even though you committed to picking it up the next day.

Glasses aren’t so bad. And just think how fortunate you are to make it to such an advanced age without needing them: I’ve had mine since my late teens.

I succumbed two years ago.

Turns out after you hit 40yr old or so things change in your eyes and glasses become a thing.

As above. That said, I’ve had mine for some years and only need them for close-up stuff. Protip: get a cheap pair online with your prescription, for the shed. Way less scary if you drop them. My exxy ones live at work to prevent me doing just that.

I’ve got a pair of 1.0’s for the shed, picked off the carousel thingy at the chemist. They were my first specs when things started going south but we were in COVID lockdown so I couldn’t get a session at the optometrist.

Turns out after you hit 40yr old or so things change in your eyes and glasses become a thing.

glasses are good, nothing more cringe than perfect eyesight.